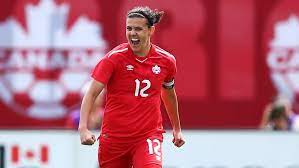 The league will consist of eight teams and MLS side Vancouver Whitecaps and Calgary Foothills Soccer Club have already committed to entering teams. In terms of sponsors, broadcaster CIBC and Air Canada, are already on board.

Set up independent of Canada Soccer, the league will still need to be sanctioned, with May 2024 being the target date for governing body approvals.

Canada are ranked fourth in the world and are the current Olympic Champions. They were runners up to the US in the Concacaf W Championship earlier this summer in Mexico.

All of Canada’s national team players ply their trade outside the country and there are believed to more than 100 women playing at teams around the world. One of the criteria for the club franchising in the new league is that each team will have at least one national team player.

“We want to change the soccer landscape in Canada,” Sinclair, the current Canadian captain who has played an astonishing 319 times for her country and scored 190 goals.

“We believe it is important that women build this league, and we are committed to developing something that is built differently, for women by women.”

“As a player that still plays on the national team, I’ve been waiting my entire career for even just the opportunity or the chance — or the choice — to play at home,” Sinclair said. “I think as national team players, that’s all we’ve ever wanted…That’s why we’re doing this,” she added. “Inspiring the next generation of young Canadians, giving young girls an opportunity to fulfil their dreams.”

Matheson, who was capped 206 times for Canada and retired in 2021, and her business partner Thomas Gilbert, are driving league’s formation under the banner Project 8.

“It’s time to change the narrative and inspire the next group. I believe kids need to see it to believe that it’s possible to happen. With the launch of this league, they will be able to go into their own backyard and watch their heroes play and dream of one day representing their hometown professional club and maybe representing Canada,” said Matheson.

The structure of the league will see owners pay a franchise fee of $1 million, with each ownership group estimated to need $8-10 million to operate for the first five seasons. The clubs will own 80% of the league and Project 8 will own 20%.

Player salaries are expected to match the minimum $35,000 paid in the NWSL, with a maximum of $75,000. Clubs will have a salary cap but the ability to spend higher to bring in big name stars – again like the US model.

“We can bring Canadians back to Canada and players [will have the] ability to monetize their brand,” said Matheson.

“Canada is so different than playing abroad — our players won a gold medal [in the 2021 Olympics] and a week later they were back with their clubs in Europe … They don’t have the opportunity to sign with brands or earn sponsorship dollars, do speeches, run camps, all these things that can drive your personal brand. Bringing players back to Canada, they’re going to have the opportunity to do that. So, we want to really leverage that with the players, as well.”

In July, Canadian Soccer Business, the body that holds all the rights for Canada Soccer’s national teams and the Canadian Premier League, announced a four-team Women’s Inter-Provincial Championship that was seen as the first steps along the way to creating a professional women’s league in Canada.

The question now is whether these plans will be shelved and support thrown behind Project 8 that is looking to establish a professional women’s league in the country on what looks to be a faster timetable.