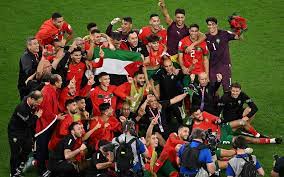 December 7 – It was with the cheekiest of Panenkas that Achraf Hakimi and Morocco upset Spain to create a 3-0 penalty win, and World Cup history, to progress to the last eight of the tournament.

Hakimi grew up in Madrid and on Wednesday he knocked Spain out of the World Cup from the spot kick following a goalless 120 minutes. It was a marvelous team-performances by the Moroccans, who sat back and picked Spain off on the counter.

The North Africans, who enjoyed boisterous support from their fans at the Education City Stadium as well as from the entire Arab world and Africa, created the three best opportunities.

Spain offered very little in front of goal in response. The goalless scoreline looked like it had been coming from the first minute, Luis Enrique’s team couldn’t score in open play, always opting for a pass too many. They couldn’t score from the penalty spot either.

This was death by passing 2.0. In Moscow, the Spanish had strung together 1,137 passes, in Doha 1039, but the end result was the same: lots of dominance of possession, but no end-product.

Spain’s playing style was dated and relied on a Tiki Taka of ten years ago, though the Spanish dugout was left in despair as Pablo Sarabia’s last-second attempt struck the woodwork and stayed out when it could so easily have gone in.

It proved a thin margin as the Spanish were knocked out for the second consecutive time in the round of sixteen. In 2014, they did not even survive the first round as defending champions.

Morocco, meanwhile, became just the fourth African team – and the first Arab nation – to reach the quarterfinal stage after Cameroon in 1990, Senegal in 2002 and Ghana in 2010.

“It is a tremendous achievement and they were all patched up, they all showed tremendous determination,” said Morocco coach Walid Regragui.

“We knew we had tremendous support behind us and we drew from that the energy to give that performance tonight.”

While Spain reflect on another glorious failure, Morocco will have the opportunity to create more history by becoming the first African country to reach the last four if they beat Portugal, who left Ronaldo on the bench in a thumping 6-1 win over Switzerland.

Morocco’s presence in the last eight has prevented Europe and South America from entirely dominating the stage. Four years ago, the 6-2 bi-continental split led to another world champion from Europe as both Uruguay and Brazil exited the tournament in the quarterfinals.