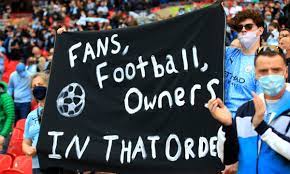 December 8 – Nasser Al-Khelaifi, one of the most powerful officials in European football, says fans will never let a breakaway Super League happen even if the courts decide in its favour.

UEFA were taken to the European Court of Justice last summer after the three remaining rebel Super League clubs – Barcelona, Real Madrid and Juventus – accused it of abusing its power to block rival events and penalise players and clubs.

The court’s advocate general is due to deliver his opinion on December 15, with the final verdict not likely until several weeks later, potentially determining the entire future of elite European club competition.

Al-Khelaifi , president of Paris St Germain, told Sky:  “The fans will never let it happen. Nobody will join them. Nobody will go to the stadium, fans. Nobody will organise anything.”

Super League promoter A22 Sports Management, the Madrid-based company that worked with the original 12 breakaway clubs in April last year before the entire concept collapsed, is still hoping to get the breakaway league off the groun

A22 Sports’ new CEO Bernd Reichart said after a meeting with UEFA last month that they had “agreed to disagree on a lot of topics” but insisted the company would ‘continue to engage with stakeholders’ and push forward with their proposals.

“It’s just their kind of lobbying and their PR which is the most stupid PR I saw in my life. Forget the stupid plan.

“I’m not really worried about the [court] decision. I think they will vote in our favour. But if not, it will not change anything. Who is going to play – three of them? Fantastic. Fantastic Super League.”