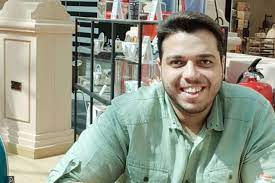 December 8 – Human rights organisation FairSquare has called on the UN to help World Cup whistleblower Abdullah Ibhais, who is currently in prison serving a three-year sentence. Ibhais family have accused FIFA of “callous indifference” over his plight within and an opaque Qatari legal system.

Fairsquare has asked the United Nations (UN) Working Group on Arbitrary Detention to examine the case of Ibhais (pictured), a former media manager for the Supreme Committee who was arrested for bribery in November 2019, shortly after voicing his concern about the treatment of migrants workers. He received a five-year prison sentence, reduced to three years on appeal, but confirmed by the Court of Cassation.

Ibhais’ legal avenues have now been exhausted in Qatar.

Fairsquare argue that Ibhais has been arbitrarily detained on the basis of a demonstrably unfair trial. FairSquare co-director Nick McGeehan said: “Three Qatari courts have now convicted Abdullah Ibhais in the absence of any evidence of wrongdoing and despite credible allegations of a coerced confession. The fact that FIFA has yet to even call for Ibhais to receive a fair trial is another indictment of the organisation’s further decline under Gianni Infantino.”

Ibhais’ predicament dates back to a strike in a labour camp. He has claimed that his persecution is the consequence of standing up for the migrant workers. At the heart of Ibhais’s allegations was an internal ‘Crisis Comms’ WhatsApp group chat from August 2019. The group was alerted to social media snippets showing a strike by workers for the construction company Iskan which were picked up by Gulf media. The workers were striking because of unpaid wages.

SC general-secretary Hassan Al Thawadi ordered his team, including Ibhais, to say no World Cup-workers were involved. That option soon vanished because at least 200 workers had been working on tournament projects. Highlighting all the progress the SC had made on worker welfare, Al Thawadi then ordered, “put a narrative on it, put a spin on it.”

Within 48 hours the wages were paid, demonstrating the influence and power of the SC. How all of this led to Ibhais’s arrest remains shrouded in mystery.  The SC explained Ibhais’s detention was due to a third party participating in the tender process for social media management had “unexpectedly” complained in late October 2019. An internal investigation found that the complaint had “merit”. Ibhais was suspended and arrested within days.

Ibhais made a confession (subsequently retracted) when under duress and denied access to a lawyer. A policeman who had investigated the case without access to Ibhais’s phone or social media, admitted in court that he had not concluded that Ibhais had committed a crime.

Ibhais’s family have released a statement saying: “Abdullah Ibhais has exhausted all legal channels, as Doha has failed him. Denied the chance of a fair trial from the very beginning, he was interrogated without a lawyer by State Security police, in a case which they admitted does not pertain to state security. Abdullah was denied access to any information about his case for one whole year while awaiting the court. Abdullah was allowed to present oral defense in just one single instance in the three levels of court he stood before; his lawyer was allowed to speak for just five minutes.”

The family demands Ibahais’s immediate release and called out Infantino for not speaking up for the marginalised and not “living up to his words”.

The statement continued: “FIFA is complicit in Abdullah’s imprisonment and FIFA’s silence is tearing apart our family. We refuse FIFA’s callous indifference. We refuse to back down: we’re calling today on FIFA to take responsibility and finally own up to this human rights travesty.”

Neither FIFA or the Qatar Supreme Committee had made an official comment at press time.