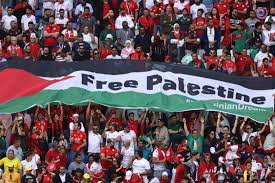 December 8 – They may not have had a team at the World Cup in Qatar but they have enjoyed a massive following just the same.

FIFA may like us all to think that sports and politics don’t mix but the tournament has been conspicuous by the number of Palestinian flags, songs and banners both inside stadiums and in the fan zones and surrounding streets.

Qatar has made much of the World Cup being the first to be staged in the Middle East and one knock-on effect has been to make it more accessible to those who support the Palestinian cause.

Israeli fans might have been given special dispensation to attend the tournament despite no diplomatic relations between Israel and Qatar, but those who have made the trip have deliberately kept a low profile.

So much so that two Israeli fans visiting the Museum of Islamic Art in Doha last week were reluctant to admit their nationality during an innocent conversation about where they were from.

By contrast, thousands of pro-Palestinian sympathisers have been present across Doha, showing their support at almost every game involving an Arab or north African country, waving the green, white, black and red national flag as they use the World Cup as a platform to make their voices heard.

Many are undoubtedly among the 250,000 Palestinians living in Qatar and a fair proportion are from the various participating nations. All of them have joined forces to rally round the Palestinian cause in an atmosphere of vociferous unity.

A group of Tunisian fans attending their game against France unfurled a massive ‘Free Palestine’ banner, a regular sight in Qatar. At the same game, a fan wearing a Tunisia shirt invaded the pitch with a Palestinian flag. When he was apprehended and pinned down by a phalanx of security staff, some of the crowd could be heard chanting ‘Palestine! Palestine!’

Morocco’s players, meanwhile, unfurled a Palestinian flag amidst the euphoria of their team’s surprise World Cup upset victory against Spain on penalties.

Omar Barakat, a coach for the Palestinian national team who was in Doha for the World Cup, said he had carried his flag into matches without being stopped. “It is a political statement and we’re proud of it,” he was quoted as saying.