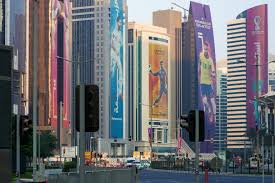 I have gone there expectantly, with my cousin and travelling companion, hoping to add a couple of extra games to those I already had purchased tickets for at this most unusual of World Cups – my ninth overall but my first purely as a fan rather than a working journalist.

It’s 29 degrees in the burning sun and there is a long queue of colourfully dressed fans snaking round strictly marshalled railings, all with the same idea. We are there in person because we have had no joy acquiring tickets through the official online ticketing portal: clicking the word ‘buy’ as soon as a seat has come up for sale, we’ve had the same maddening experience each time when, seconds later, said seat is mysteriously no longer available.

None of us are going to strike lucky, however. An unmanned megaphone on a rolling loop belts out the same monotonous message over and over again. “There are no tickets available for today’s games.” Hopes dashed again.

On further investigation, the gathering throng are told the only way of acquiring any is via – you’ve guessed it – the online ticketing portal.

It’s a classic catch-22 scenario, rendered even more frustrating by the fact that there have been a number of empty seats dotted round almost every one of the eight stadiums on match days. So much for being certain of seeing more than one game in a day.

Despite this bureaucratic blip, as fan experiences go there have surely been fewer better organised World Cups to attend than Qatar 2022, notwithstanding the ongoing and important narrative about migrant workers’ rights which continues to hang over the event and deserves to long after the final whistle.

My week in Qatar was weird and wonderful in so many ways in terms of the sights, smells and sounds of east meeting west. The crime-free cleanliness; Muslims respectfully called to prayer several times a day; local Qataris in their thobes and robes, many with their faces painted in team colours, western-style. A World Cup of contradictions, with unprepossessing back-street convenience stores sitting side by side with the showy signs of affluence.

With the tiny Gulf state not used to being invaded by football fans from all over the world, there was a sense of unreality about the whole thing. And at times it did all feel a bit artificial, with fan zones and cafes occasionally giving off a ‘rent-a-crowd’ vibe.

But there is no doubting the Arab region’s passion for football. How many fans are local workers seizing the chance to support their country of origin and how many had poured in from the participating nations themselves was hard to tell, but also in a way irrelevant. Rarely have I heard more noise from fans than that exuberantly generated by followers of Tunisia and Morocco.

In my experience of World Cups, few can rival Qatar for the friendliness, courtesy and hospitality shown to the guests in their country. The Qataris put on a welcoming front that went some way to mitigating the entirely justifiable debate about whether the country should have been awarded the tournament in the first place, let alone it being staged in winter.

There were, don’t get me wrong, a number of niggles: the exorbitant cost of stadium food and drink which, in the case of a bottle of water, was ten times more than in a side-street ethnic convenience store. Or having to walk sometimes for up to 45 minutes to get to the stadium once off the super-efficient metro. On one occasion my cousin and I cheekily commandeered a golf cart to get us to the game on time, pleading physical incapacity!

But in the main the positives far outweighed the negatives. The so-called Hayya card, the personalised fan ID, along with its accompanying digital ticket system, proved a huge success in terms of supporters using public transport – free of charge – and entry to stadiums. There were also hordes of human helpers, official ‘guides’ along stadium routes shouting “metro, this way” and using giant foam fingers to direct supporters.

Security may have been tight (so tight that I had something as innocent as a pen confiscated after being told I could stab someone with it) but it was also remarkably quick at the turnstiles. On one occasion, having explained politely that the strange-looking cream-coloured liquid in my rucksack was in fact stomach medicine, staff on the gates were understanding and courteous.

Another huge plus was the almost total absence of ticket touts and the feeling of being constantly safe – an important factor, especially for the more absent-minded visitor such as this writer.

When my cousin left a restaurant after inadvertently paying the bill with Chinese instead of Qatari currency, instead of being pulled aside and questioned, he was ever so reverentially informed by the waiter chasing us down the street that the money was not acceptable.

There were several examples of how Qatar’s strict penalties against anti-social behaviour worked to our advantage. The chance of being pickpocketed or mugged in the street is virtually nil.

At my very first game, I accidentally forgot to pick up a vital article of clothing after passing through security. On realising my error, I rushed back with minutes to spare before kick-off and, after a thorough search of each and every entry point, I found it lying on the same tray where I had left it, waiting to be collected.

As for the unavailability of alcohol in and around stadiums, it did little to damage the fan experience. Only once did I see any supporter being even close to looking inebriated (an England fan I might add). If you wanted a drink badly enough, searched hard enough and had sufficient funds at your disposal, it wasn’t difficult to find a licensed bar to watch matches – provided you booked in advance. Invariably these were located at exclusive hotels where, for a hefty fee (of course), you could buy a daily pass and sometimes enjoy a refreshing swim in the sea or pool to boot.

Not all of them, however. One Brit-styled pub, reputed to be the cheapest in town (still the equivalent of £25 for three drinks with a voucher), was a throwback to the 1970s and, for me, instantly avoidable. Though the atmosphere was fantastic, you could hardly breathe for the cigarette smoke or move because it was so rammed.

Qatar, as we know, spent eye-watering billions on infrastructure. The country could not be more different in terms of skyscrapers, roads and public transport from when I first visited over a decade ago. There are legitimate questions to be asked about what happens to all of it when everything gets back to normal. And not just the eight stadiums.

What about the hundreds of accommodation blocks built specially for the tournament? It would certainly be interesting to return in, say, a year’s time to see how it all unfolds when the thousands of overseas visitors have gone home.

There are also legitimate questions about whether it was right and proper to expect the players, rather than politicians, to fly the flag for human rights. Of course, there are serious shortcomings when it comes to Qatar’s laws and treatment of migrant workers – shortcomings that need constantly highlighting. But there are also double standards at play.

Among the many pontificating commentators and sporting figures who have lambasted Qatar’s right to host, a fair few have been only too happy to take the regime’s money when it suits them – whether working for the local broadcasting company or taking advantage of Qatar’s excellent training facilities.

That the tiny country half the size of Wales got lucky winning the vote back in 2010 is undeniable. Some might say verging on scandalous. Just look at how many of the FIFA voting members have now been indicted for corruption. But it is also undeniable that the Middle East as a whole deserved its chance to showcase the region’s attributes.

Perhaps the overriding memory of a World Cup week full of contrasts is what happened on a day spent on more cultural pursuits, away from the intensity of the matches.

On a visit to the must-see Museum of Islamic Art, we met one of the authors of an impressive hardback book explaining the museum’s Iraqi section.

A Paris-based legal counsellor with a passion for everything from football to political science, he just happened to be there at the same time as us and ended up becoming our impromptu guide.

As if that wasn’t enough, at the end of a fascinating history lesson this most engaging and intellectual stranger invited us to lunch. When we respectfully and reluctantly declined, mainly out of courtesy, he was quick, with total sincerity, to chastise us.

“If an Arab invites you to lunch,” he said, half-jokingly, “you’d better have a good excuse to say no.”

Needless to say, we changed our minds on the spot.