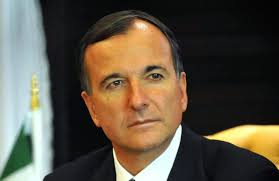 Frattini’s list of achievements and leadership positions in sports and society, particularly in Italy, was long. He served twice as Italy’s foreign minister and held several other cabinet posts.

Previously, he had served as Secretary-General of the Italian Prime Minister’s Office (1994), President of the Parliamentary Committee for Intelligence and Security Services and State Secrets (1996), Minister for Civil Service and for the Coordination of Information and Security Services (2001-2002), and Member of the Prime Minister Commission for the Constitutional reforms (2013 – 2014). From 2011 to 2013, Frattini acted as President of the De Gasperi Foundation.

Frattini was always close to the world of sport and was President of the High Court of Sport Justice (CONI) in Italy. He also served as judge of the Court of Arbitration for Sport, based in Lausanne.

He received the ‘Knight Grand Cross of the Order of Merit of the Italian Republic’ and was distinguished with the ‘Commander of the Legion of Honour’ by the President of France. In 2011 Frattini received the ‘Golden Neck Chain of the Olympic Order’, the highest honour of the International Olympic Committee (IOC). The award was a recognition of his personal commitment and of Italy’s efforts to have the IOC awarded Observer status at the United Nations.

When the sports integrity movement began to gather pace, Frattini was at the forefront, becoming the first Chair of SIGA, being initially elected in 2017 and re-elected for a second term  in July 2021.

He received the SIGA Special Recognition Award last October and was appointed Honorary Chair after presiding over his last meeting of the SIGA Council. He said at the time: “I am extremely proud of the remarkable impact and growth of SIGA in recent years…The need for SIGA is greater than ever. Keep pressing for change, for greater honesty, for greater integrity, because, without integrity, Sport is nothing. You will always have my unconditional support and sincere recognition.”