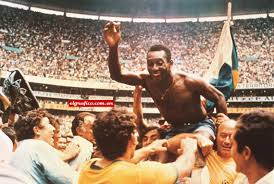 December 30 – Brazil has declared three days of national mourning as tributes poured in from across the globe to mark the death of Pele, arguably the greatest player ever, at the age of 82.

Footballers past and present, presidents, prime ministers, clubs, sporting organisations and virtually anyone connected with the player known simply as ‘The King’ paid their respects in honour of the man who epitomised the Beautiful Game.

He had been undergoing chemotherapy since having surgery to remove a tumour from his colon in September 2021. He was readmitted to hospital in late November and had also been suffering with kidney and prostate problems.

Edson Arantes di Nascimento, to give him his full name, is credited with scoring a world record 1,281 goals in 1,363 appearances during a glittering 21-year career, including 77 goals in 92 matches for his country.

“His legacy is impossible to summarise in words,” said FIFA president Gianni Infantino. “For everyone who loves the beautiful game, this is the day we never wanted to come. The day we lost Pele. He achieved immortality a long time ago and therefore he will be with us for eternity.”

Cristiano Ronaldo and Lionel Messi – the greatest players of their own generation – both posted tributes as did football’s new superstar Kylian Mbappe while Brazil’s President-elect Luiz Inacio Lula da Silva, US president Jo Biden and former US president Barack Obama all shared their thoughts about the man who rose from humble beginnings to become the most recognised and most loved sporting star in history.

Rarely if ever have so many condolences poured in to remember the life of a single sporting personality – or any famous figure for that matter.

But that is a mark of the extent to which Pele lit up the sport with unrivalled style on the pitch and an infectious smile off it. And of someone who transcended football. “He understood the power of sports to bring people together,” said Obama.

“Pele changed everything,” said Brazil’s current No. 10, Neymar. “He turned football into art, into entertainment. He gave a voice to the poor, to black people.”

Although there have been a plethora of brilliant No. 10s over the years, none quite lived up to Pelé, the focal point of the 1970 World Cup-winning Brazil team, widely regarded as the finest international side in history. The image of Pele being carried aloft after the final is one of many memorable images of his stellar career.

Much of his popularity had to do with his modest personality and refusal to let fame go to his head.

“God gave me this ability for one reason: To make people happy,” Pele said during a 2013 interview with Reuters. “No matter what I did, I tried not to forget that.”

Johan Cruyff, the former Dutch footballing icon and face of Total Football in the 1970s, once said before he died in 2016: “Pelé was the only footballer who surpassed the boundaries of logic.”

The debate about who was the greatest single international player ever – some argue Diego Maradona, others Messi – will continue long after Pele’s death. But his legendary status is unmatched by any other player before or since.

“Like all legends, the King seemed immortal,” said current French coach Didier Deschamps. “He made people dream and continued to do that with generations and generations of lovers of our sport. Who, as a child, didn’t dream of being Pelé?”