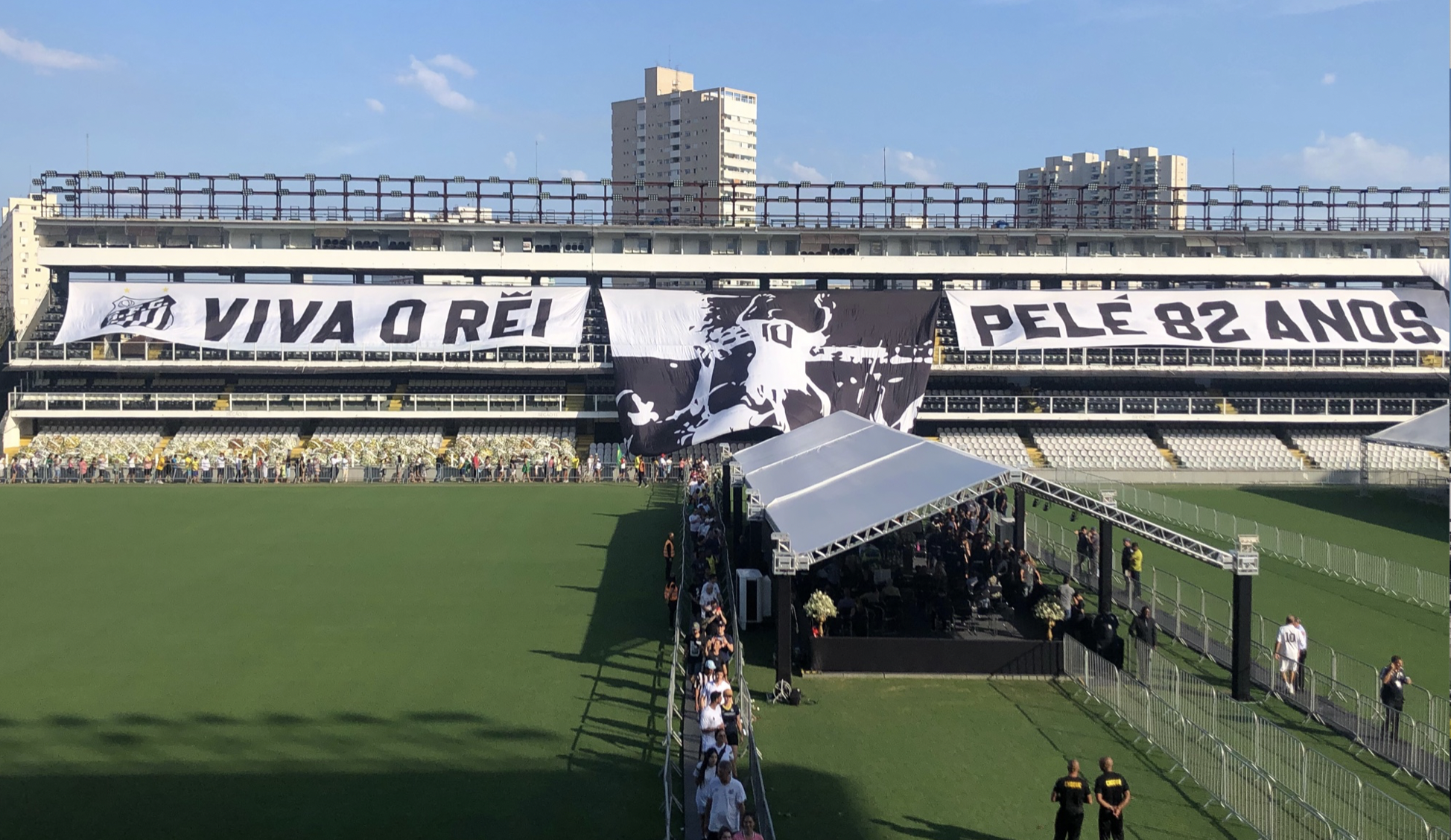 By Samindra Kunti in Santos, Brazil

January 3 – From former legends to a supreme court justice, Brazilians mourned the passing of Pele on Monday at the Vila Belmiro, the stadium where he exploded into life and became the greatest player of all time. Today, Pele’s final journey will include a cortege through the city before a private burial.

Thousands of fans and supporters, predominantly dressed in Santos shirts, filed past the body of Pele who lay in state following his death last Thursday at the age of 82.

Santos’s compact, old-fashioned stadium opened its doors at 10am and banners in the stands reminded mourners of his greatness with messages from ‘Long Live the King’ to ‘The only one to stop a war’. Rows of number ten shirts and flower wreaths covered other parts of the stadium.

Outside the main entrance, Santos legends Clodoaldo and Antonio Lima declared that there would never be another Pele again. Earlier, FIFA president Gianni Infantino had arrived together with Comnebol supremo Alejandro Dominguez and CBF chairman Ednaldo Rodrigues. Infantino said that FIFA will ask all the world’s countries to name a stadium for the Brazilian football legend.

“We’re going to ask every country in the world to name one of their football stadiums with the name of Pele,” said Infantino. “We’re here with great sadness. Pele is eternal. He’s a global icon of football. I am here with a lot of emotion, sadness, but also with a smile because he gave us so many smiles.”

The FIFA president remained for two hours as other dignitaries, including the mayor and governor of Sao Paulo, paid their respects. Brazilian supreme court justice Gilmar Mendes said: “It is a very sad moment, but we are now seeing the real meaning of this legendary player to our country. My office has shirts signed by Pelé, a picture of him as a goalkeeper, also signed by him. DVDs, photos, a big collection of him.”

Pele was the game’s first superstar, winning the world cup three times and cementing Brazil’s name as the futebol nation, but he was also Brazil’s ultimate ambassador, his face and smile recognisable in every corner of the world.

Pele’s best friend Manuel Maria said: ‘“If I had all the wealth in the world I would never be able to repay what this man did for me and my family. He was as great a man as he was as a player; the best of all time. His legacy will outlive us all. And that can be seen in this long line with people of all ages here.’

On Tuesday, Brazil’s new president Luiz Inacio da Silva is expected at the Vila Belmiro shortly before Pele’s body will be removed from the stadium for the cortege and then a private internment.