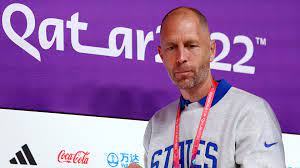 January 4 – USA men’s coach Gregg Berhalter, whose contract ended at the end of year, was threatened by a blackmailer at the Qatar 2022 over an incident in 1991, when he was 18 years old.

The blackmailer threatened to “take down” Berhalter with information over a drunken argument with his girlfriend – now wife of 25 years – during which he kicked her legs. The blackmailer’s objective appears to be to end his career with the US team.

Berhalter said in joint statement with his wife “that a single bad decision made by a teenager does not necessarily define him for the rest of his life… We had been dating for four months when an incident happened between us that would shape the future of our relationship.”

“One night, while out drinking at a local bar, Rosalind and I had a heated argument that continued outside. It became physical and I kicked her in the legs.”

Berhalter described the incident as a “shameful moment” and “one I regret to this day”. He said following the event he voluntarily sought counselling, “one of the most valuable decisions I ever made”.

On hearing of the allegations US Soccer immediately began an investigation using law firm Alston & Bird which is ongoing.

US Soccer said it had learned about other “potential inappropriate behavior towards multiple members of our staff by individuals outside of our organization. We take such behavior seriously and have expanded our investigation to include those allegations.” No detail of the behaviour was given.

US Soccer in its statement said it was continuing with its “full technical review” of men’s national team programme and that “with the review and investigation ongoing, U.S. Soccer will announce who will lead the January Men’s National Team camp in the coming days. We look forward to building off the performance in Qatar and preparing for the journey towards 2026.”

Berhalter said that he was “looking forward to continuing my conversations with US Soccer about the future”.