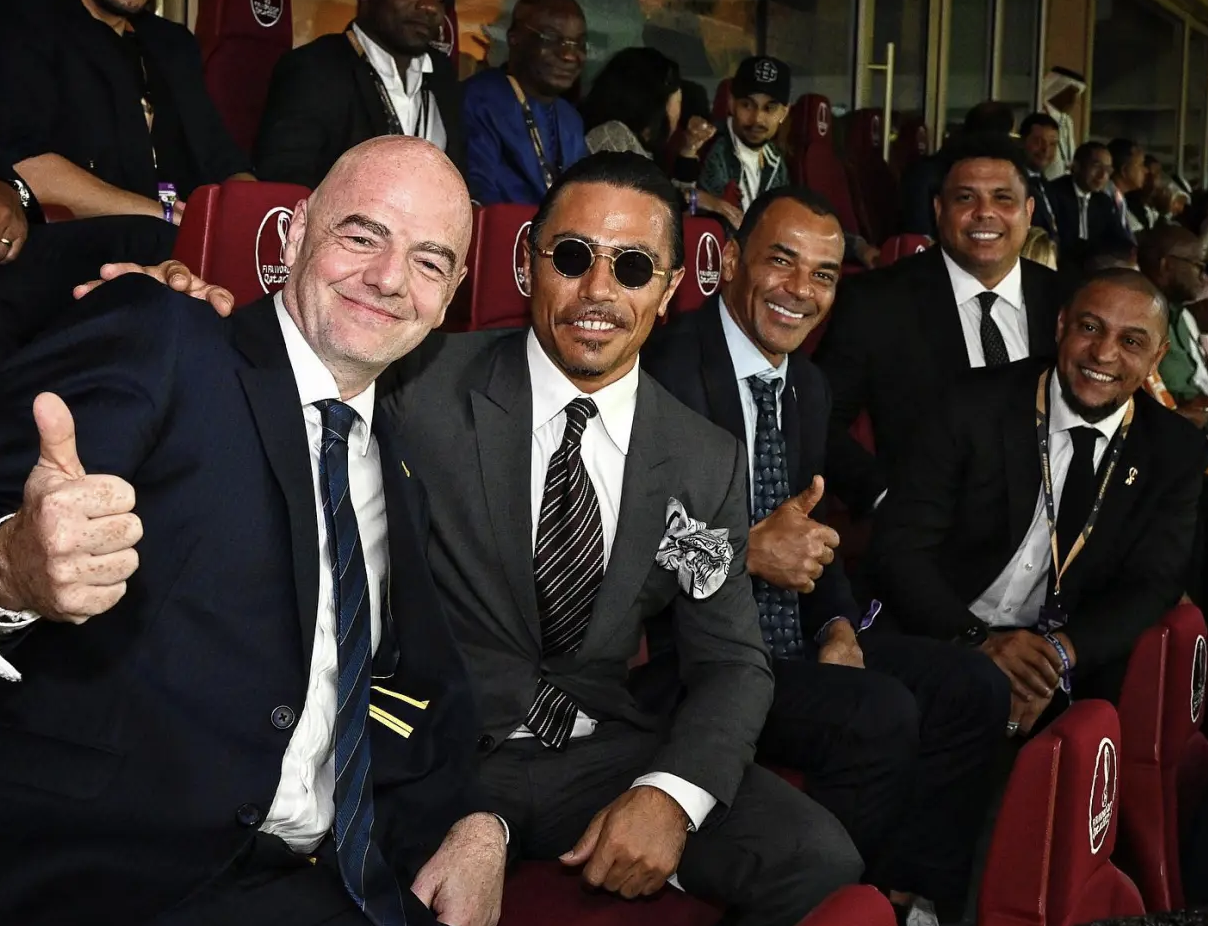 With the Qatar 2022 World Cup gone, with Pelé having succumbed to colon cancer (“every country should now have a Pelé stadium”, GI Joe said), with Argentina having won the Cup, with (North) African football having put its foot down, with Asian football proving what Salman’s predecessor said was right when he claimed that the future was Asia…

with the US having demonstrated that “it won’t be coming home their way” any time soon, with the Swiss having three ‘real’ Swiss on the team (white boys from the Bernese Oberland, one assumes, the rest being Kosovars, other Balkanese and naturalized black talent), with an all-black French squad delivering except for penalties, with Qatar having proven that you can organize a mega event if you hire myriads of foreigners and senselessly throw money and the kitchen sink at everything, with all that having happened, there is one constant that apparently won’t change this year either: one of the most useless and incompetent presidents FIFA has ever had to endure, will still be around for another term.

How that speaks for global football is your best guess: if he’s the only guy ‘qualified’ to run the world’s biggest game, without even one contender stepping up to the plate on March 16 in Kigali, Rwanda, to compete for the Presidential Office, then you can ask yourself whether the six Confederations shouldn’t just finally get together, form a steering group and organise world football professionally, and without the spoils and bribes Infantino’s game lives off.

But it will be Infantino once again. And fittingly, he’ll be re-elected with thundering applause in the very country of UK Home Secretary Suella Braverman’s wet dreams, where the English want to send their refugees who made it over the Channel, having risked their lives. What better place than Kigali for an election that never was.

Nobody – except for his mother, one hopes – will want to insult Infantino by claiming that he’s a looker. With the exception of the omnipresent bromancing small person (I wanted to write dwarf but then remembered that that’s not very pc) who persistently throws salt around, for which an international collective of complete idiots from Dubai to London pay mega bucks – only to savour a slice of a dead animal from Argentina or a hormone-and-anti-biotic-infested cut from the US. Cool runnings, Bae.

Salt Bae was Infantino’s real achievement (I guess the other was his moving to Qatar, which doubtless in his mind saved the World Cup). To have such a footballing nonentity around, whose claim to fame is defined by erratic and echolalic behaviour, frequently resulting in catatonic salt-throwing, to have that guy trying to force Messi into submission for a selfie, to then have him rummage around the pitch after the final whistle had gone, as if he had won the Cup, and making a proper nuisance and ass of himself by hugging (at least trying to hug) all and sundry – none of the sundry inclined to respond to his obnoxious efforts – and then to have Mr Salty prance around before and after the final, shaking hands with the King of Malaysia, properly introduced by GI Joe – because it was the right thing to do? – and hugging the FIFA bigwig (correct that: the FIFA baldie) as if there was no tomorrow, this was what the German language calls a ‘Sternstunde’ of utter cringevulsion.

Is this really what little petit-bourgeois Infantino imagined to be the world stage – in all the years of grand dreams as an employee of UEFA: snugging a salt-throwing football imposter so hard that the bulge was nearly showing and parading his conquest to the free and not-so-free world as the true star of the Qatar World Cup, 2022?

What pain, what embarrassment, what a shit-show. And now FIFA are investigating how the ‘smallperson’ actually managed to get an ‘All-Access’ Pass. Guttural laughter is permitted: investigate what? NOBODY could have got an ‘All-Access-Pass’ without the micromanaging megalomaniac’s approval. Nobody.

So what will this increasingly useless organisation investigate? Infantino’s signature on some form, and whether it was faked? What laughable nonsense will this investigation come up with, when literally no investigation since 2015 that mattered, resulted in anything sensible? Give us a break, we beg you.

But it will be Infantino all over again at the top of FIFA, and he is everywhere: in his adoringly refurbished jewel of a Qatari-owned spectacular building in Paris (“You know, FIFA was actually founded in Paris,” he’ll tell you), in his Doha home (the new World HQ of FIFA?), and, occasionally, in his corner office overlooking the lawns and driveway of FIFA House, where the organisation settled a few years ago, only to be abandoned for Europe’s most beautiful City, Paris, and the Middle East’s new-born hotspot, Doha. (though that is something the Saudis will want to nix and the faster the better).

There are still a few little issues though.

There are the various criminal investigations into Infantino by two independent Federal prosecutors in Switzerland, who have taken more time to figure out the obvious than it takes to climb Mount Everest in underwear.

Their purpose is to find out what was said by who, why and for what ultimate purpose on a lovely day in a hotel in the Swiss capital – which happens to be owned by Qatar, and where a conference room for Infantino &Co was booked, literally steps away from the front door of the Qatari Embassy that inhabits the exact same floor of the hotel. Cool, eeh?

Yet based on the track record of Swiss investigators, prosecutors and courts, it doesn’t seem that Infantino need worry too much: the only footballing achievement of the Swiss Authorities since 2010, which eventually culminated in a PR show of US proportions in 2015, was to lie down, spread its legs and get properly done by American Justice.

Swiss Justice has reached a level of incompetence (putting this kindly) that would scare literally nobody. Every single case that was actually brought to a Swiss court in the context of FIFA wrong-doing, died. Either it died a sudden death or one in slow motion, but it died. The goodly Swiss were so keen to co-operate with the US DOJ that they supplied every bit of information that could even be of remote interest –  with a US law firm firmly embedded at FIFA for months, and a senior FIFA operative providing assistance every step of the way.

So, roll on 2023, Swiss Law will die quietly once again. Infantino will get away with everything as his predecessor did. It’s the way the Swiss operate. Never rock the boat but rather throw those overboard who might become a problem. They are good at that. They call it neutrality. Others call it opportunism.

And it will save the day again. This time for GI Gianni.

Tell me when I was wrong.