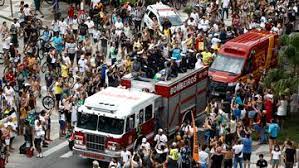 By Samindra Kunti in Santos, Brazil

January 4 – On Tuesday Santos and Brazil bode farewell to Pelé, the nation’s greatest icon. Almost a quarter of a million mourners and supporters, including newly sworn-in president Luiz Inacio da Silva, filed past Pele’s coffin in a serene funeral procession before a private internment.

The Brazilian president attended a small mass after the city of Santos had honoured its most famous citizen for the past 24 hours. It was a moment rich in symbolism as a new age in politics began while the country was saying farewell to Pele.

The black casket was then removed from the temporary tent in the centre circle as Pele left the Vila Belmiro one last time, the stadium he had first entered as a teenager and where he stormed on to the world stage and cemented his name as the world’s greatest football player winning countless trophies and playing superlative football.

Crackers exploded as the funeral procession – Pele’s casket on top of a firetruck – proceeded slowly through the streets of Santos and passed the house of his 100-year old mother, with fans lining the streets. The cortege took four hours before a private burial at a cemetery in the shadow of Santos’ stadium. A trumpetist played the club hymn.

Attending the private ceremony, Clodoaldo, a Santos legend and 1970 World Cup-winner recalled Pele’s suffering in the latter stages of his life due to his poor health but expressed his gratitude for everything his former teammate had meant.

However, other football legends and stars faced a major backlash for failing to attend the funeral procession. FIFA president Gianni Infantino – heavily criticized himself for taking a selfie near Pele’s coffin – Conmebol boss Alejandro Dominguez, CBF president Ednaldo Rodrigues as well as local politicians claimed their moment, but a lot of football players remained absent.

Clodoaldo was the only member from the 1970 team to attend the funeral while, with the exception of Mauro Silva, an official of the Sao Paulo Football Federation, not a single player from the 1994 and 2002 World Cup-winning sides showed up. Kaka and Ronaldo as well as contemporary star Neymar were singled out for criticism. Most Brazilian clubs also failed to send a representative, Real Madrid did.

“Pelé is a citizen of the world, at the same level as Nelson Mandela or Mahatma Gandhi, but Brazilians don’t know how to recognise that,” said José Ferreira Neto, a former Brazil midfielder and a famous TV presenter.

“If they were World Cup winners and didn’t come to see Pele, what can I say to them? At the very least it shows a lack of respect.”

Last month Kaka said that Brazilians did not show enough respect for their national heroes, citing regular criticism of Neymar and Ronaldo. The former AC Milan star spent a month in Qatar during the World Cup as a BeIN Sport pundit, Ronaldo as a FIFA legend. The former came in for heavy criticism.

“Where is Kaká, who said Brazilians don’t recognise their heroes?” wrote Walter Casagrande Júnior, a Brazilian columnist. “Well, Kaká, after what we saw at Pelé’s wake, it’s clear that it is you who don’t recognise major heroes.”

Neto added that this would not be forgotten.

A three-time World Cup winner, Pele had been suffering from colon cancer and passed away last Thursday at the Albert Einstein Hospital, surrounded by his family and loved ones, prompting a global outpouring of love and tributes. Apart from Brazil’s football players, Brazilians and Santistas did just that as well – embrace Pele one last time.