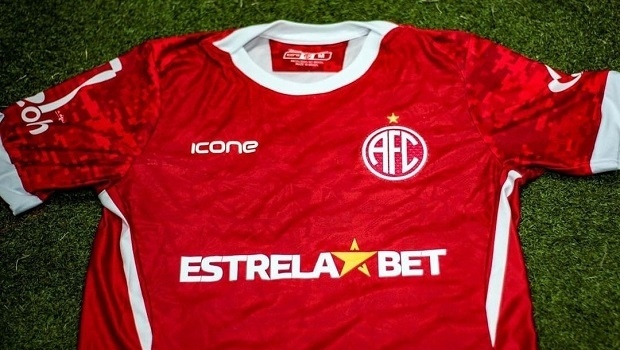 January 5 – Online bookmaker EstrelaBet, who before Christmas sealed a deal with the Brazilian federation (CBF) for sponsorship of all its futsal clubs, has now moved into mainstream Brazilian football becoming the main sponsor of América Futebol Clube.

Estrelabet will have its logo on the front of the Belo Horizonte club’s shirt in a two-year deal that covers all domestic competitions as well as América’s participation in the Copa Sudamerica.

EstrelaBet’s logo will also be on the front of the women’s team shirts and in the U20 men’s team, as part of a deal that the club said was the biggest in its history, though no value was given.

Marcus Salum, President of América Futebol Clube, said: “We are working hard to consolidate América at a new level, and the arrival of EstrelaBet is another step in this direction. We are very happy with this sponsorship contract, which is the biggest in our centennial history. responsibility increases and our level of professionalism and conformity of deliveries with our sponsors needs to accompany this evolution.”

The growth of betting company sponsorship in Brazil has been rapid with online bookmakers scrambling to deals on premium club assets.

Estrelabet’s deal with the CBF Futsal was described by Rafael Zanette, head of sponsorships at EstrelaBet, as “one of the greatest in the history of EstrelaBet. Futsal is one of the most popular sports in the world, but nobody has perfected it like Brazil. Being part of the CBF and stamping the shirt of a team that already had so many stars brings us an inexplicable pride. We’ve already put a Star on the chest of the Selection, and now we’re going in search of another one!”

Now the bookmaker is expecting the top tier of the domestic club game and Conmebol’s pan-regional competition footprint to drive its expansion.