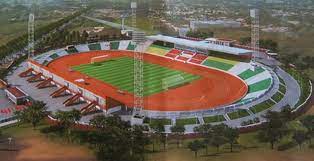 January 6 – The government of Guinea-Bissau has become the second country to heed the call of FIFA president Gianni Infantino and rename a stadium after Pelé.

The decision to rename the Bafatá field, the second capital of the country, to Estádio Pelé was taken at the Guinean Council of Ministers, meeting in Bissau, under the chairmanship of the head of state, Umaro Sissoco Embalo.

“As a result and as an expression of public recognition of the status of King of World Football that is granted to him, the Council of Ministers decided to name the Regional State of Bafatá ‘Pele Stadium’ in response to the appeal of the president of FIFA,” said Embalo.
Bafatá’s playing field was called Estádio da Rocha and was used by Sporting Clube de Bafatá, a club founded in 1937 that competes in the Guinean first division.
President of the Guinea-Bissau Football Federation, Carlos Teixeira, said: “Pelé is today a unique figure in the world. Everyone knows in this world who Pelé is, he was a planetary figure.”

Cape Verde’s Prime Minister Dr Ulisses Correira e Silva announced that his country would rename its national stadium in Praia. Silva said the decision was taken due to the country’s historical ties with Brazil.