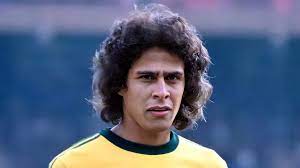 Dinamite had a brief spell with FC Barcelona in Spain, but it was at Vasco da Gama that he made his name and legend as an outstanding goal scorer. He netted 190 goals in the country’s top flight, a record.

“It was with the deepest regret that Vasco da Gama learned that the greatest of all has left us this Sunday. Carlos Roberto de Oliveira, alias Dinamite, dedicated 29 of his 68 years to the club, as player and president. Rest in peace,” said Vasco Da Gama in a statement.

In total he scored 780 goals in 1110 matches for the club between 1971 and 1979. He later became a president of the club and also went into local politics, serving as a deputy in the state of Rio de Janeiro.

He also featured for Brazil 38 times, scoring 20 goals and represented the Selecao at the World Cup in 1978 and 1982.

In a statement the Confederation of Brazilian Football (CBF) wrote: “With regret, the CBF mourns the death of Roberto Dinamite, one of the greatest athletes in Brazilian football.

“For the Brazilian national team, the former player scored 25 goals and was top scorer in Brazil’s [second-place campaign at] the 1983 Copa America.

“He also played in the 1978 and 1982 World Cups. You will always be part of our football history.

“Thanks for everything, Roberto. Rest in peace.”

CBF president Ednaldo Rodrigues added: “Roberto Dinamite was one of the greatest players in the history of our football.

“In addition to joining Vasco’s beautiful history, he enchanted football fans all over the world. The CBF sympathises with the goalscorer’s family and fans.”