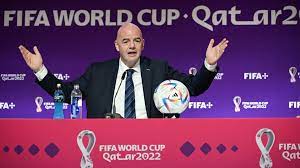 January 10 – Fresh from the delivery of the World Cup in Qatar and a month of football highs and geo-political lows, FIFA president Gianni Infantino is back in Switzerland today for a second interview with Swiss prosecutors looking into his own criminal case.

In December 2021 the Swiss Federal Assembly confirmed the appointment of two senior magistrates to continue the criminal investigation into FIFA president Gianni Infantino and his dealings with former Swiss Attorney General Michael Lauber. This was after the first prosecutor, Stefan Keller, appointed to investigate allegations into criminal misconduct, was removed from the case.

He had a first meeting with special prosecutors Ulrich Weder and Hans Maurer in April 2022.

The criminal complaint against Infantino refers to three undocumented meetings between the FIFA boss and Switzerland’s former attorney general Michael Lauber in 2016 and 2017. Lauber is also under investigation.

The suspicion is that Infantino was seeking information on investigations into FIFA and its former executives, potentially with the intention to influence the course of those investigations. One rumour is that Lauber was also given information by Infantino regarding the CHF2 million ‘disloyal’ payment sanctioned by former FIFA president Sepp Blatter to Infantino’s former boss at UEFA Michel Platini.

That case has made its way through the Swiss judicial system with both Blatter and Platini being acquitted.

Infantino’s case is still unresolved. It is notable that while other Switzerland-based FIFA officials and executives have immediately been suspended when criminal investigation into their conduct has been initiated, Infantino has somehow managed to remain in office.

But also what has remained is the investigation into Infantino. Infantino is running unopposed for another term as FIFA’s president. To be able to do that he still has to pass FIFA’s electoral commission and its ‘fit and proper’ person test.

Cynics would argue that a criminal investigation into his conduct meets all the criteria required of a high-ranking FIFA official.