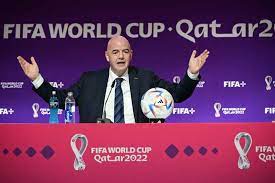 January 13 – FIFA’s World Cup host broadcaster was ordered to film Gianni Infantino at least once during every game he attended in Qatar and to ensure that he was not pictured while on his mobile phone, according to a news report.

The Times newspaper says the Swiss-based Host Broadcast Service (HBS) was sent emailed directives over the type of coverage of the FIFA president that was expected. This was then used by all broadcasters who bought the rights to the live matches.

HBS were apparently told to obey three rules when screening footage of Infantino and whomever he was sitting next to as his guest.

The Times claims that there was “at least one incident” of a tv match director screening footage of Infantino when he was on his phone, which allegedly led to the person responsible being admonished.

Infantino was a frequently seen and occasionally booed figure throughout the month in Qatar having previously sparked global reaction to his extraordinary pre-tournament news conference monologue when he appeared to dismiss concerns about the country’s human rights record and oppression of minority groups.

“Of course I am not Qatari, I am not an Arab, I am not African, I am not gay, I am not disabled. But I feel like it, because I know what it means to be discriminated, to be bullied, as a foreigner in a foreign country.”