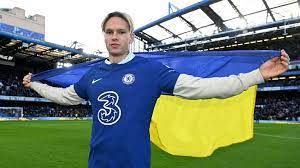 January 16 – Big-spending Chelsea have splashed out their biggest fee so far in the January transfer window by acquiring 22-year-old Shakhtar Donetsk winger Mykhailo Mudryk for an eye-watering €100 million + on an eight-and-half-year contract.

The much-touted Ukrainian, signed from under the noses of Arsenal, commented: “This is a huge club, in a fantastic league and it is a very attractive project for me at this stage of my career.”

Britain’s Press Association reported that while Chelsea and Arsenal were believed to have offered a similar amount, the Blues structured a deal which would see Shakhtar receive more money up front and with more favourable add-ons.

Although Chelsea didn’t disclose the fee, Shakhtar said in a statement it will receive €70 million and another €30 million “as a bonus payment.”

“I am sure that Mykhailo will win respect, sympathy and love of all connoisseurs of world football with his speed, his technique, his impressive and beautiful play,” Shakhtar president Rinat Akhmetov said.

Mudryk, who has played just 65 club games across his career to date, had posted several Instagram messages seemingly suggesting he was keen on a move to Arsenal.

Chelsea moved quickly, though, to add him to the signings of Benoit Badiashile, David Fofana and Andrey Santos while Joao Felix, who has joined on loan from Atletico Madrid for a reported £11 million for just a few months until the end of the season, was sent off on his debut a week ago.

Chelsea are 10th in the Premier League and stand to miss out on tens of millions of euros if they fail to qualify for the next Champions League. Chelsea earned over €95 million for their 2020/21 Champions League run that saw them beat Manchester City in the final.

“He’s a hugely exciting talent who we believe will be a terrific addition to our squad both now and in the years to come,” Chelsea chairman Todd Boehly and co-controlling owner Behdad Eghbali, who also spent big last summer, said of their latest acquisition.