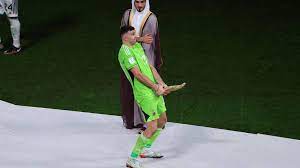 January 16 – FIFA have opened a disciplinary case against world champions Argentina for alleged “offensive behaviour” by players and violations of fair play at the final in Qatar.

Argentina goalkeeper Emiliano Martinez (pictured) made a lude gesture with his Golden Glove trophy after the match.

Martinez is also claimed to have mockingly called for a moment of silence in the dressing room for French footballer Kylian Mbappe, according to media reports. Later, at a parade in Buenos Aires, he displayed a doll with a picture of Mbappe attached.

FIFA said Argentina had potentially breached rules regarding “offensive behaviour and violations of the principles of fair play” and “misconduct of players and officials”.

FIFA is also investigating the Argentine FA over breaching media and marketing regulations which appear to relate to a boisterous celebration by players running through the interview zone after the final on December 18.

About three hours after Argentina beat France in a penalty shootout after a thrilling 3-3 draw, players led by captain Lionel Messi ran through the official interview area and damaged flimsy partition walls without stopping to speak to international broadcast and print media.

In other cases, FIFA imposed fines on the federations of Serbia, Mexico and Ecuador for acts of discrimination by fans at the World Cup.

Serbia was fined CHF 50,000 for offensive fan chants during a 3-2 loss against Switzerland – which had some players with ethnic Albanian ties to Kosovo – and team misconduct for seven players being shown yellow cards.

FIFA fined Mexico CHF100,000 for anti-gay chants by fans at two games, and Ecuador must pay CHF 20,000 for chants at the opening game against Qatar reportedly directed at Chile who had tried and failed to take Ecuador’s place in the tournament.