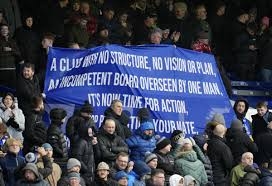 January 16 – In an unprecedented move, the entire board of struggling English top-flight club Everton stayed away from last Saturday’s home game against Southampton due to a “real and credible threat to their safety and security”.

The advice from security officials followed “malicious and unacceptably threatening correspondence” the club said in a statement.

“Never before has our entire Board of Directors been ordered not to attend a match on safety grounds. It is a profoundly sad day for Everton and Evertonians.”

Everton ended up losing yet another fixture, this time 2-1, leaving the Toffees 19th in the English Premier League table, above last-placed Southampton only on goal difference. Everton’s 15 points after 19 league matches is the joint lowest in its history.

Banners were paraded throughout the stadium while thousands of fans remained after full time for a sit-in protest at Everton’s ongoing slump which has now been extended to nine matches in all competitions.