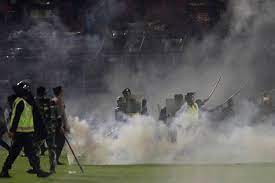 January 17 – Indonesian authorities have opened the trial against five men – police and match officials – charged with negligence over their alleged roles in one of football’s deadliest stadium tragedies on October 1 in East Java’s Malang city.

The disaster led to 135 deaths after police fired teargas fans to disperse fans who invaded the pitch when Arema FC was defeated in a home match for the first time in 23 years by arch rival Persebaya Surabaya.

Police described the pitch invasion as a riot and said two officers were killed but survivors accused them of overreacting. Videos showed officers using force, kicking and hitting fans with batons, and pushing spectators back into the stands.

An investigation team set up by Indonesian President Joko Widodo in response to the national outcry concluded that the tear gas was the main cause of the crowd surge.

It said police on duty had no knowledge that the use of tear gas is prohibited at stadiums and used it “indiscriminately” on the field, in the stands and outside the stadium, causing more than 42,000 spectators inside the 36,000-seat stadium to rush to the exits, several of which were locked. Indonesia’s human rights commission, which conducted a probe into the stampede, found police fired 45 rounds of tear gas.

Prosecutors charged the five men – three police officials who allowed or ordered officers to use tear gas and the Arema FC Organizing Committee chair and security chief – with criminal negligence causing death and bodily harm, which carries a penalty of up to five years in jail if found guilty.

Lead prosecutor Ari Basuki said the three police officers had given clear instruction to their subordinates to fire tear gas.

“They did not consider the risk factors,” Basuki told the court. “Their order to fire (tear gas) was a form of negligence and carelessness that built up the risk of a panicked crowd fleeing for exits of the stadium and a crush.”

After the disaster Widodo announced that all league matches would be suspended and that Kanjuruhan stadium would be demolished and rebuilt. League games have since resumed but behind closed doors.