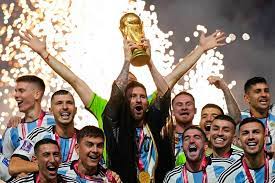 January 17 – The 2022 World Cup was heralded as a resounding success for fans from around the globe – it thrilled and moved people to tears of happiness and sorrow.

Many new records have been made, jinxes have been broken, and history has been rewritten by the 32 teams that travelled to the desert nation of Qatar. Some of the new records were unexpected, as seen by World Cup Predictions.

Ronaldo makes if 5 out of 5

In 2006, he scored his first World Cup goal from the penalty spot in a 2-0 victory over Iran. His next World Cup goal occurred four years later in South Africa as they defeated North Korea 7-0. Ronaldo scored in Portugal’s 2-1 victory over Ghana at the 2014 World Cup in Brazil, even though his team was eliminated in the group stage.

Ronaldo scored his latest World Cup goal for Portugal on November 24 and was 37 years and 292 days old, making him the oldest player to score for Portugal.

Ronaldo joined Lionel Messi, Lothar Matthaus, Antonio Carbajal, and Rafael Márquez as the only players to have participated in five FIFA World Cups when he played against Ghana in Qatar.

But CR7 was forced to leave Qatar unexpectedly early and without the coveted trophy after Portugal was stunned by Morocco 1-0 in the quarterfinals.

Messi has now participated in 26 World Cup games at finals, more than any other player. Nineteen of those matches were as captain.

In the final he scored against Mexico from the spot to become the first player to score in each knockout game since the round of 16 was added in 1986, making him a focus of World Cup Picks.

He also scored in extra time, giving him seven goals for the tournament and an overall World Cup total of 13.

Giroud scored later in the tournament, taking his total to 53 goals, and appeared determined to achieve more and maintain the status of the French national team’s all-time leading scorer.

Argentina was leading 2-0 with 10 minutes remaining in the World Cup Final, and Lionel Messi was on course to capture the only title he hadn’t won yet.

Kylian Mbappe, on the other hand, had different ambitions. He scored first from the penalty spot. Then, a few minutes later, he kicked the ball into the net to force extra time. This was definitely considered in World Cup expert picks when the final match was announced.

Mbappe scored another penalty to join England’s Geoff Hurst (1966 winner) as the only individual to score a hat-trick in the World Cup Final and require a penalty shootout.

Mbappe now had eight goals for the tournament, one more than Messi, which earned him the Golden Boot. Before turning 24, he had already scored more World Cup goals than Pele.

The Tottenham goalkeeper faced England in the quarter-finals and earned his 143rd international cap, surpassing Lilian Thuram as France’s most capped player.

Lloris took the caps to 144 against Morocco in the semi-finals and 145 against Argentina in the final match.