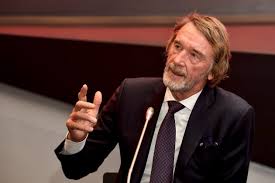 January 18 – Sir Jim Ratcliffe, the billionaire owner of petrochemicals firm Ineos and one of Britain’s richest men, has entered the bidding process to buy Manchester United, a spokesperson for the company has confirmed.

Ratcliffe is ready to make an offer to United owners the Glazer family, who last November revealed they were looking at options to sell the Premier League giants after 17 years in charge.

“We have formally put ourselves into the process,” INEOS said in a statement. “As part of this process, the board will consider all strategic alternatives, including new investment into the club, a sale, or other transactions involving the company.”

Ratcliffe, who already owns French club Nice, was born in Manchester and was a boyhood United fan.

He made a late bid to buy Chelsea last year for £4.25 billion when former owner Roman Abramovich put the London club up for sale but lost out to a consortium led by Todd Boehly and Clearlake Capital. Ratcliffe argued that Chelsea were a national asset and the ownership of the club should remain in British hands.

Ratcliffe met with the Glazers after his failed bid for Chelsea who told him they were not interested in selling. Since then a statement from United in November said the board will “consider all strategic alternatives, including new investment into the club, a sale, or other transactions involving the company.”

The Times newspaper, which first reported the news, said formal bids for Manchester United were expected to start next month, with United potentially changing hands by the end of the season.

American investment firm Raine Group, who handled Chelsea’s sale, are exclusively advising United, who are valued at about £5 billion.

The Glazer family, who took control in 2005, paid £790 million. They have never been popular with the club’s fans, particularly over the seasons since the retirement of Alex Ferguson as manager and the decline in club’s on-pitch fortunes – they haven’t won a trophy in six years.

Under new manager Erik ten Hag, the club are turning performances around and sit fourth in the table after beating cross-town rivals Manchester City 2-1 on Saturday.

The club have so far made no comment on Ratcliffe’s declaration of interest. It is unclear who he is likely to be bidding against.

United are very well run commercially and it is hard to see where any new owner can add or find significant commercial upside to justify a £5 billion price point. That would likely rule out private equity investors who are motivated by potential profit and building value.

Sovereign wealth funds from Qatar and Saudi Arabia have bought PSG and Newcastle United and there will inevitably be interest from Gulf nations.