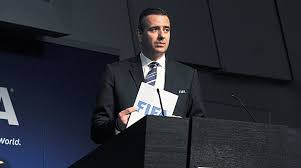 June 18 – News was released yesterday that a Swiss cantonal supreme court has ruled that FIFA’s firing of its former finance director and acting secretary-general Markus Kattner (pictured) in 2016 was “considered as unjustified”.

The new ruling overturned an earlier finding by the lower labour court in Zurich. The court is now ruling on what damages should be awarded to Kattner who is seeking CHF 10 million in compensation.

FIFA fired Kattner following an “internal investigation uncovered breaches of his fiduciary responsibilities in connection with his employment contract.”

At the core of the investigation was bonus payments made to former president Sepp Blatter, former general secretary Jerome Valcke and Kattner who FIFA said had secretly given themselves pay rises and massive World Cup bonuses totalling CHF 79 million (£55 million). Kattner is believed to have received more than CHF 10 million.

The contracted payments were made during their last five years in office and appeared to violate Swiss law.

The case against Kattner looked to be pretty solid and four years later in June 2020 Kattner was banned for 10 years by FIFA and fined one million Swiss francs ($1.06 million) after a further probe into the bonus payments.

But while FIFA ruled that Kattner was guilty of conflicts of interest and abusing his position, the Swiss court didn’t agree.

Nor did the court agree that Kattner’s obtaining of a recording of a FIFA executive committee meeting at the governing body’s congress in Mexico City in 2016 where Infantino had complained about his own salary at FIFA, was grounds for dismissal. That recording appeared in the media the day after Kattner had gained a copy.

For his part Kattner says he had warned Infantino about his expenses when he came into office and that Kattner had filed an Ethics complaint accordingly.

The writing though had always been on the wall for Kattner as Infantino had said that he would not have a European general secretary.

One of Kattner’s breaches of clear FIFA regulations was to have his contract of employment reviewed by an outside lawyer that he then sanctioned for payment through FIFA’s accounts.

While Kattner has won the current ruling, there is still the chance that the new ruling could be overturned.