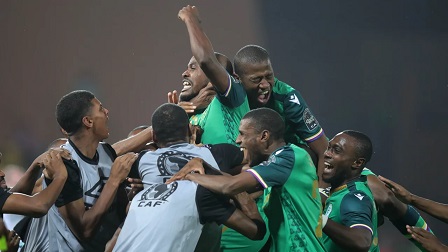 January 20 – Comoros FA (FFC) boss Said Ali Athouman has said his team cheated at the Africa Cup of Nations over positive Covid tests, but the Confederation of African Football (CAF) has said that it would have been “impossible” for teams to cheat the ruling bodies’ Covid rules.

Debutants at the Africa Cup of Nations, Comoros were one of the revelations of the tournament reaching the knock-out rounds where they played hosts Cameroon with an outfield player in goal because 11 of their squad members had tested positive, but FFC president has said that some players still played after registering positive tests against Ghana in the group phase.

Speaking at his wedding in January, Said Athouman said: “Against Ghana – I can say it now since time has passed – we had first-team players who tested positive and we managed to have them on the pitch playing.”

In a statement to The Guardian, Athouman clarified his comments suggesting that they had been misunderstood, arguing that those players had then taken another test which turned out to be negative.

CAF have not been amused and insist that it would have been impossible to cheat the confederation’s Covid-19 protocols. A spokesperson said: “PCR tests at Afcon were done by an independent company from Switzerland. Results were sent to a doctor – a CAF Covid officer – and this person worked with the teams to ensure that only players who test negative and comply with CAF Covid protocols play. Only CAF tests were considered.’

During the last AFCON, CAF guidelines stated matches would still go ahead even if none of the 11 players was a goalkeeper.