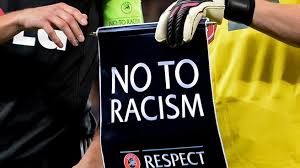 So, there’s yet another new category to be added to the ‘white trash’ species. A guy called John Yems, is to be let off with a slap on the wrist, despite being a rotten racist. But hey, he was “not a conscious racist”.

So says an ‘independent’ panel that the glorious English FA commissioned with the difficult job. And said panel came up with a rather novel new term and invented “not a conscious racist’. How cool is that.

Therefore, I gave up, and settled for the obvious: the fabulous panel was qualifying the racist the only way it could: upstanding Englishman of a pale-white skin tone.

White cannot be wrong, and if White is wrong, it isn’t because White doesn’t mean it when he calls other ethnic groups disgusting names. It is because he is ‘unconsciously racist’. That’s when I want to shout ‘give me a fkng break’ but I won’t. Even The FA didn’t particularly like it, nor did they like the slap-on-wrist punishment meted out by the truly understanding panel of independent souls: they opposed it. Quite spectacular.

Racial insults are not an issue. Whether it’s English cops who exercise their favourite pastime by calling black boys dirty names (at best, really, considering that they just might get shot too), whether it’s the football manager of Crowley who unconsciously refers to Asian players as curryburgers, whether it is an arbitrary member of the public who simply cannot take it anymore that British society is no longer pale white but bi-, tri- or (God forbid) multi-racial; it’s all good. Because those good folk never mean it, do they. They never knew it was offensive to call a black person by a nasty name or use the revolting short form when addressing an Asian player. Or insult black players if they miss a penalty – and apologetically accept same when the player’s name is Kane.

It cannot be a problem if the President of the Football Association has a bi-racial sister-in-law. Wait…maybe that’s not the best example. (Jeremy Klaxon showed the way after he met the King’s wife, an accomplished home wrecker, but never a racist. Well, hardly ever.) So, the president of The FA, Princely William, he hasn’t commented yet (at least by this press deadline). But the poor guy needs to chew this over: with his sister-in-law apparently taking down the monarchy right now, he’s got an issue or two to deal with. Yup. A racial issue too. Poor thing.

Let’s stare reality in the face: there’s the Windrush thing, where thousands of Caribbeans, were originally invited to the UK to help rebuild the country after WWII, only to be serially kicked out of the country because they didn’t have British citizenship – 60 years later, and kids that were born here, went to school here, work here and they paid British tax for 60, 70 years. And the non-white Homey Secretary of staunchly Asian descent apparently wants to just faahhhget about it and no longer deal with the rancid injustice the Windrush generation and its sons and daughters must deal with. I guess that is unconscious racism too then, because consciously no braver man can possibly think anti-black or anti-Asian if she is of the same ilk herself – with parents who wouldn’t have made it into the UK under her own rules.

Reality is a bitch, and were it not so atrociously disgusting, I wouldn’t even want to mention it – because it is the English norm, innit?

That’s a bit like not conscious racism, isn’t it.

We need to find out what that is, don’t you think?