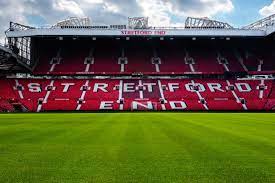 January 24 – Manchester United is to return the Stretford End of Old Trafford to all-general admission seating. Gone will be premium executive seats that had been criticised by fans.

Man Utd’s executive fan elite were once famously cricitised by former captain Roy Keane for their lack of passion, saying “at home they have a few drinks and probably the prawn sandwiches, and they don’t realise what’s going on out on the pitch.”

There will be no more prawn sandwiches or ‘executive ticket tourists’ in the Stretford End as the club recognises the arguments of its Fans’ Advisory Board and supports the  “ongoing efforts to enhance the Old Trafford atmosphere”.

Collette Roche, Chief Operating Officer at Manchester United, said: “Structural work will take place over the coming year to return the Stretford End to general admission seating and create a new concourse. During this period, we will be consulting fans to understand how best to repurpose the space currently used by the International Suite.”

Rick McGagh, Head of Fan Engagement at Manchester United, said: “The Stretford End is one of the most famous stands in world football. It has been the backdrop to many of the most memorable moments in our history, and when it’s at its loudest you can feel the difference it makes to the players, and the connection the fans have with the team.

“Fans and fan groups including MUST and TRA have long campaigned for us to remove the executive seats from the heart of the Stretford End and to make them standard tickets and therefore more accessible to all fans.

“We have listened and agree that as many fans as possible should have the chance to be a Stretford Ender. We have worked with our Fans’ Advisory Board in recent months to make this happen and we are all looking forward to an even louder Stretford End from August 2024.”