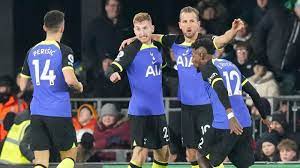 Kane, whose future is likely to be decided at the end of the season, fired a right-foot shot on the turn to give his side the lead on the stroke of halftime – his 15th goal of the campaign.

The 29-year-old is already a Tottenham icon but securing a share of a goal record held by Greaves has only enhanced his reputation.

Greaves, who died aged 81 in 2021, is regarded as one of the most natural goal scorers in football history. A member of England’s 1966 World Cup-winning squad who netted 44 times for his country, he remains the highest scorer in English top-flight history with 357 goals in total.