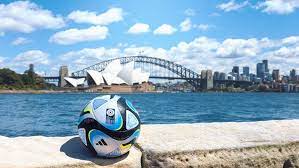 January 25 – Adidas has unveiled the official ball for the Women’s World Cup 2023 in Australia and New Zealand, which like the ball for the Qatar 2022 finals last year, will feature connected ball technology.

Called OCEAUNZ, it is the ninth consecutive ball created by adidas for the FIFA Women’s World Cup.

The design has been inspired by the landscapes of host countries Australia and Aotearoa New Zealand.

It is also a celebration of the cultures of both host countries and features designs by Aboriginal artist, Chern’ee Sutton, and Māori artist, Fiona Collis, whose art is also used in the event’s brand identity, Beyond Greatness.

The connected ball technology debuted in Qatar and provides precise ball data, which will be made available to Video Match Officials in real-time.

Combined with player position data and by applying artificial intelligence, the technology also co-ordinates with  semi-automated offside technology which will also debut in the women’s game at the World Cup.