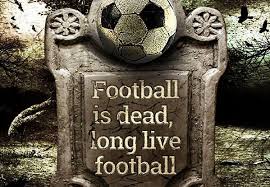 I have been watching social events, political mayhem, financial meltdowns and cultural phenomena for too many years not to understand and accept how very important every human interaction is to, well, at least SOMEbody.

What I never fully grasped, is how some things that have no meaningful bearing on literally anything (despite the ludicrous and painful assertions that claim otherwise) can allegedly contribute to World Peace, the resolution of the worst political conflict or indeed the sex drive of the common garden snail…

One such thing that has been elevated to nigh-saintdom is football. Or, shall we say, Association Football (as opposed to Rugby, which little British town was the birthplace for both).

The amount of absolute gibberish – further rendered ludicrous by a small man from the Canton de Valais, deeply embedded in a Swiss alpine refuge – that accompanied this game over the past four decades is quite mind-boggling:

Instead of simply accepting that football is a game, nothing else, the recent FIFA management (the one before GI Joe, although Joe threatens to move pretty much in the same direction) lifted this father-and-son pastime (laterly also mother-and-daughter pastime) to such levels of exceptionalism that any straight-thinking person would have had to scratch his/her head over the completely insane claims that were associated with a simple ball, 22 pairs of legs, a (hopefully) green pitch, two goals and a few – usually blind and deaf, and sometimes crooked – referees.

Under Blatter, football became a world power by its own definition and Messiah Blatter’s making. It was suddenly so much more than a game. It had morphed into an instrument of World Peace (sorry but: bullshit), it suddenly had massive educational value (team play, fair play and playing sitar on my nerves) and was yet another tool to instrumentalise equality for women (errhm, what?). Football fights racism, it was proclaimed (no, it doesn’t), it brings people together (nonsense: go visit Red Star vs Partizan, both Belgrade, and dare say that again; or try Olympiakes/Panathinaikos and cry), and takes kids out of the ghetto (no, it doesn’t: education does and equal opportunity does, not bloody football!).

Suddenly, football turned into some sort of heal-it-all by Blatter’s making. It was changing the world (For the game. For the World. – what a load of horsemanure!), and it was helping the poor (are you serious? Have you ever looked at South Africa and Brazil AFTER the world cup? Give me a break!). In his ever-increasing self-acclamation, and the complete delusion that football was a thing of world leaders and those who generally run things, Blatter’s FIFA lifted off to cloud la-la (or 9, if you wish) and looked down to earth with much pity and zero compassion. Because the compassion the Blatterites preached was about as honest as Chuck Blazer’s weight loss programme.

The reality of football is stark and very different: just the other day, FIFA fined Iran’s soccer federation CHF45,000 “for several religious manifestations” when the country hosted South Korea in Tehran on October 11; FIFA fined the Croatian and Kosovan soccer federations a total of CHF80,000 for anti-Serbian chants. This magazine also reported only a few days ago: “In other cases, FIFA imposed a series of fines for “incidents involving discriminatory and unsporting conduct by fans, including homophobic chants in some instances” at recent World Cup qualifying matches. FIFA fined the Albania federation CHF50,000 for a range of incidents at a home qualifier against Macedonia in September. And the Ukraine federation was fined CHF15,000 for fans displaying a “discriminatory flag” when it hosted Kosovo last month in Krakow, Poland. Brazil was fined CHF25,000 for anti-gay slurs during a home match against Bolivia in Natal on October 6. Paraguay’s federation was fined CHF20,000 and the Argentina and Chile federations were each fined CHF15,000 Swiss francs ($15,400) for similar offenses. Estonia was fined CHF20,000 for insulting chants by fans when hosting Greece in Tallinn on October 10.”

So, what’s with the high-flying ideals? Football’s fabulous contribution to World Peace, the easing of political tensions (yeah right, see Israel-Palestine football mayhem) and the healing power of the game?

It is time FIFA finally understood that football is just a game. It is not a game-changer. Football’s alleged power to do good is a fairytale and then some. The game was never anything more than 22 men or women kicking a ball around a pitch, trying their utmost to win, be that by dirty, foul or sporting means.

Football is not only a direct reflection of societal ills, it is the expression of those ills by masses of the most primitive foot-soldiers of societies that appear to need a valve to let loose, to scream their smut into the sky and to feel comfortably anonymous – thus empowered – in a group of equally sick-minded folk.

FIFA should stop pontificating about the greatness of a game that is neither great nor particularly special. It is nothing but a game. And it is a game that has been perverted by money just like any other aspect of modern (Western) life where the little guy has lost direction and is desperately trying to find ways to express his frustration with a life he no longer cherishes nor understands.

Football, I’m afraid, is dead. Its ludicrous claims to be a power for good were kicked in the teeth by its own administrators. FIFA’s own conduct, and that of innumerable of its “leaders”, who quickly exchange the bicycle and sandy sandals for a private jet as soon as they inhabit high office, indicates that football is sickly and deplorably fraught with the worst that society has on offer.

Football is not a contributor to World Peace. It is not a means to help diffuse conflict and it is nothing but a simple game, played by simple gladiators of a society that is simply and badly in decay, nearing collapse.

Repair the game, get rid of its ills and then start preaching about a Brave New World, Mr and Mrs FIFA. And hopefully not the way Aldous Huxley so amply did.