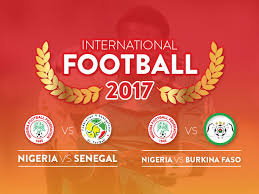 March 27 – Nigeria’s friendly with Burkina Faso in London tonight has been called off after several Burkina Faso players failed to gain visas in time.

According to the Nigeria Football Federation (NFF) “seven players in the Burkinabe contingent failed to secure entry visas into the United Kingdom”.

The match was scheduled as part of Nigeria’s build-up for the 2019 Africa Cup of Nations qualifier against South Africa in June and the World Cup qualifier against Cameroon later in the year. The game was to be played at Barnet’s Hive stadium.

“The match in question is called off due to no fault of either the organisers or the Nigeria Football Federation. We will announce further plans for the Super Eagles’ preparation for these two important qualifying campaigns in due course,” the NFF said in a statement.

Nigeria drew 1-1 with Senegal on Thursday night at the home of English fourth-tier side Barnet and the same venue was due to be used for the Burkino Faso game.

Three-time African champions Nigeria have failed to qualify for the last two editions of the Africa Cup of Nations but under new manager Gernot Rohr got off to a flying start in their 2018 World Cup qualifiers, recording a 2-1 win in Zambia and a 3-1 home victory over Algeria.