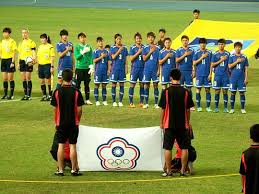 September 15 – Taiwanese sports officials outlined plans to build six soccer stadiums to help kickstart a professional league during a visit by a delegation from Japanese club Vegalta Sendai to the Legislative Yuan in Taipei on Thursday.

A meeting with the Japanese delegation was hosted by legislators Huang Kuo-shu and Lee Li-feng from the ruling Democratic Progressive Party.

At the meeting, Sports Administration Director-General Lin Te-fu revealed that the government has committed NT$2.4 billion ($79.7 million) under the Forward-looking Infrastructure Development Program for the construction of the six soccer stadiums, one in each of the nation’s special municipalities.

According to Lin, the stadiums will help kick-start a true professional soccer league consisting of six professional clubs based in the six cities, with main sponsorship from each city government and major corporations based locally.

Max Shih, a sports commentator and honorary chairman of the Taiwan Football Development Association, paid tribute to the Japanese visitors, saying Taiwan could learn a lot from ongoing economic, cultural and sports exchanges between the two nations and pointing to Vegalta Sendai as a model for the Taiwanese soccer community to emulate.

Huang Kuo-shu, who has been a fierce critic of Taiwanese sports governing bodies, said he would ask the government to focus on soccer, the world’s most popular game, and enable public-sector organisations to invest or sponsor teams, again praising the example of the Sendai based club which received initial funding from Japanese energy giant Tohoku Electric Power Co, with the Miyagi Prefecture Government holding a 24.9 percent stake in the club and the Sendai City Government a 23.5 percent share.

Chinese Taipei, as FIFA term Taiwan in deference to China PR, sits in 151st position in the FIFA Men’s Ranking well behind China PR who sit in 62nd, although it punches above its weight in terms of population. The current Taiwanese top league – the Football Premier League – consists of eight clubs four of which are university sides and none of which are fully professional.