November 10 – The stand-off in the blockade of Qatar by its Gulf neighbours has inevitably dragged the hosting of the 2022 World Cup into the geo-political mix with news that the United Arab Emirates has a plan to attack Qatar’s currency and devalue its economy. Alongside the financial warfare sits a PR offensive designed to destroy confidence in the Qatari economy and change the hosting status of 2022.

The plan was leaked to The Intercept via Global Leaks. The documents are alleged to come from a hotmail account belonging to UAE Ambassador to the United States Yousef al-Otaiba.

The plan has been drawn up by Banque Havilland, a private bank based in Luxembourg and focusses on driving down “the value of Qatar’s bonds and increase the cost of insuring them, with the ultimate goal of creating a currency crisis that would drain the country’s cash reserves,” reports The Intercept.

The strategic assault on the 2022 hosting of the World Cup is based around creating a lack of confidence in Qatar’s ability to comfortably fund the $200 billion committed to the project. By undermining the local economy and questioning the depth of the cash reserves, the UAE plan is to force FIFA to rethink Qatar’s hosting on the basis that the country can no longer afford the event.

The UAE plan is then to follow this up with an appeal to FIFA to share the hosting throughout the region as a whole, positioning “football as a tool to stabilise the region”.

The plan suggests that “if Qatar rejects the proposal, they will seen to be unwilling to work with their GCC partner.”

An irony in itself as Saudi Arabia and the UAE were the primary suppliers of the raw materials for the 2022 build in Qatar before the blockade began.

The UAE plan also alludes to running a dis-information campaign around the original award of the tournament and the unproven claims of bribery, as well as issues concerning construction worker’s rights (an issue Qatar has now resolved but which the rest of the region now lags behind on).

There are numerous flaws to the UAE plan, not least that it is not based with a football objective but purely a political objective – something that is frowned upon by FIFA (though somewhat selectively).

FIFA has continually backed Qatar’s right to hosting throughout the blockade and petitions of its neighbours, and this is a position that is unlikely to be changed. It is unlikely that even the US (losers in the 2022 bid) would support this position with US Soccer Federation president Sunil Gulati having made it known on a number of occasions that their focus is on winning the hosting rights to 2026 and that as far as they are concerned 2022 is being hosted in Qatar.

The UAE and Saudi Arabia in particular have already shown reluctance to participate in football circles with Qatar and have been given a deadline this month, along with Bahrain, to confirm whether they will participate in the Gulf Cup in Qatar next month.

Saudi Arabia – reeling from a purge of its senior government officials – was already facing potential issues of its own, coming under growing scrutiny from international sports governing bodies for government interference in its national sports federations. New minister of youth Turki Al Asheikh has made new appointments at 17 of the country’s sports federations, and although incumbent football officials remain in place rumour is that they are not making the federation decisions. Changing officials at the top of the Saudi FA could spark FIFA to get involved and potentially endanger their participation at Russia 2018.

As it stands the UAE plan looks like having little chance of success, and in fact is so transparently political it could harden public and football opinion in Qatar’s favour. That is something the embattled Qataris haven’t experienced too often on the journey to 2022. 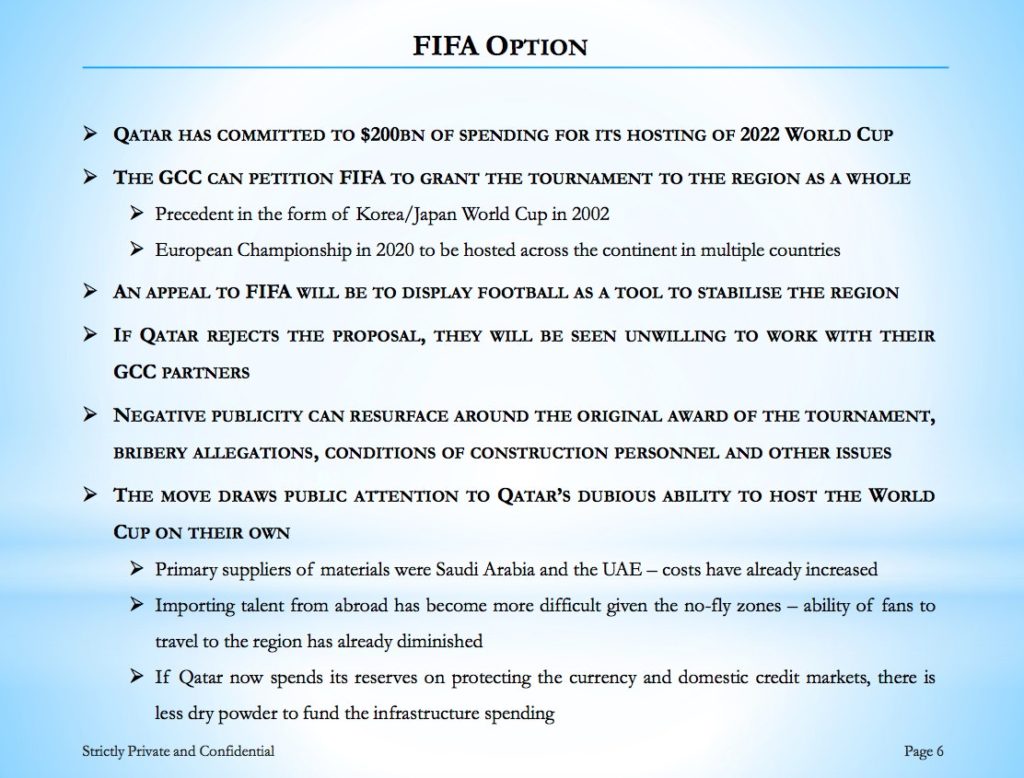 Extract from Global Leaks documents published by The Intercept