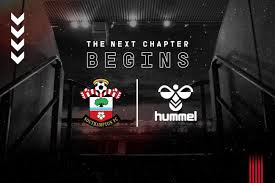 January 18 – Premier League Southampton have ended their kit deal with US firm Under Armour three seasons early in favour of a new partnership with Danish sportswear brand, hummel.

The new five-year agreement will start July 1 with hummel providing match, training and travel wear across the club’s men’s, women’s and academy teams.

Saints agreed a 7-year partnership with Under Armour in 2016. Under Armour also supplied Tottenham Hotspur until the club switched to Nike in 2017 in an estimated £30 million a year deal. Under Armour have changed their corporate strategy for football, ultimately bringing an end to the Saints deal after four years.

Southampton’s chief commercial officer, David Thomas, said: “hummel’s core mission of wanting to change the world through sport aligns perfectly with our disruptive approach to how we behave on and off the pitch.

“We hope these shared values will create a unique partnership that not only produces great kits for our players and fans but also redefines the positive impact two like-minded organisations can achieve together.”

The choice of hummel sees a return to the supplier who were with the club 1987-1991.

“After 30 years apart, we’re extremely proud and honoured to be back as an official partner of Southampton,” said Allan Vad Nielsen, hummel’s CEO.

“Football is engrained in our brand DNA at hummel and the partnership with Southampton represents another huge step of our ambitious growth plans and expansion internationally.”

Last May hummel took from Umbro at Everton in a three-year deal that was announced as a record for the club. Saints will be hummel’s second Premier League  team.