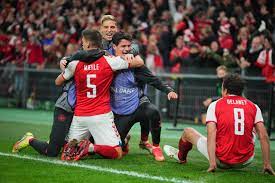 October 13 – After an economic 1-0 victory against Austria, Denmark is heading to the World Cup again, seven points clear at the summit of Group F.

At a packed Parken Stadium, the Danish dominated the first half but failed to convert their chances. The brilliant Joakim Maehle changed that in the 53rd minute when Thomas Delaney collected the ball on the halfway line, dribbled along the edge of the Austrian box and teed up the wing-back whose crisp finish sent Kasper Hjulmand’s team to Qatar.

It was Denmark’s eighth win out of eight in the group. Having scored 27 goals and conceded none, the Danish are out of Scotland’s reach. In the Faroe Islands, the Scottish struggled, but ultimately clinched a late 1-0 win and three crucial points in the fight for the playoff spot.

“I had feared that the match against Scotland away would be crucial,” said Hjulmand. “Now we go to the World Cup to win it all. It is a great advantage we have one year to prepare. We have shown we are hard to play against. We have a strong collective where we stand together.”

After a remarkable semi-final run at Euro 2020 following the dramatic collapse of talisman Christian Eriksen, Denmark have reached consecutive World Cups for the first time since 2002. At France 1998, the Nordic country was one of the sensations of the tournament with the Laudrup brothers in their ranks, but Brazil ended their adventure in Nantes. Four years later, Denmark fell to England in the round of 16.

Denmark have become the second nation to ensure their participation at the global final. On Monday, Germany book their spot following a 4-0 victory against North Macedonia. Hosts Qatar qualify automatically.