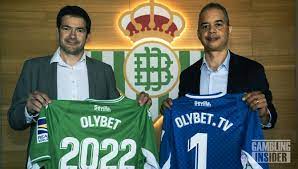 May 27 – Gambling regulations in Spain will prevent LaLiga clubs from taking shirt sponsorship from betting firms from the end of the season, but it is not stopping bookmakers cutting promotional deals with clubs for other markets.

OlyBet has expanded its footprint from a Baltic base to other European markets in recent years.

said: “Customers will now receive more opportunities to engage with the football club via live broadcasts and games, local events, social media and the best betting experiences in Europe.”

OlyBet Club will provide punters with opportunities to attend events, to meet players and to join “exclusive entertainment experiences”.

The Royal Decree that brought the change is Spanish promotional regulations is aimed at reducing minors’ exposure to gambling advertising, by banning sponsorship deals and limiting advertising at certain times of the day. Existing deals have been allowed to continue until the end of the current Spanish football season under a special agreement though clubs and LaLiga have lobbied hard but unsuccessfully against the new laws.

The government argued that gambling advertising spend had tripled in the past four years, alongside an increase in gambling among people between 18 and 25 years old. In 2017, the government said, 28% of new players came from this demographic, increasing to 40% of new customers by 2019.