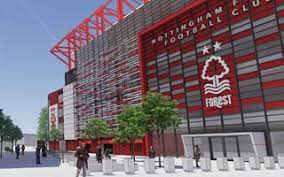 August 1 – Nottingham Forest have been greenlighted to redevelop their City Ground that will see an extra 5,000 seats added to the 30,455 capacity.

The cost is estimated at £94 million, and will see the club’s Main Stand demolished and rebuilt at twice the capacity.

The plans were passed by the local council as Forest return to the Premier League after 22 years.

As part of that preparation the club, under owner Evangelos Marinakis, has spent £74 million on new players in the current transfer window as it seeks to rapidly establish itself back in the top flight. It is the most any club has ever spent on players after being promoted to the Premier League.

Belgian international Orel Mangala, who signed from Stuttgart for a reported £12.7 million, is the latest to join the Forest revolution.

The stadium expansion was first mooted in 2019 but met with planning authority delays. Now they have been overcome the aim is to complete the build by the end of the 2023/24 season, with the possibility that the lower tier could be opened before then.

A club statement released on Friday said: “Today’s decision represents a significant landmark in the journey to redevelop the historic City Ground site and represents the culmination of 3 years of dedicated work by the Club and its advisers.

“We believe that the development of the site is crucial to maintaining the club’s status in the Premier League and all of the benefits to the local community and economy which this status brings.

“The development will also represent the physical manifestation of the desire of the Club’s owner Mr Marinakis to leave a historic legacy at the football Club.”