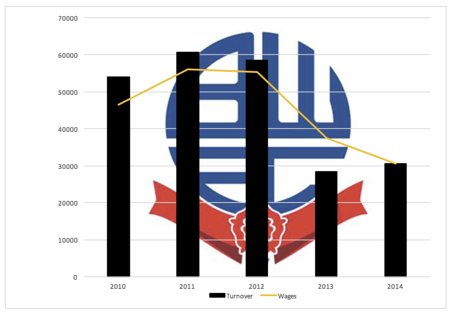 “I am somewhat exhausted; I wonder how a battery feels when it pours electricity into a non-conductor.” Arthur Conan Doyle

Electricity is a wonderful, life-giving force. The defibrillator whose high-voltage pulse revives the dead from cardiac arrest; the electrical storm that destroys forest deadwood to give way to new growth beneath; the power that animates a television. It illuminates the floodlights that give us night football and, figuratively, it gives us the best of those nights when the atmosphere is electric.

Electricity has powered and empowered the advance of civilisation for almost 200 years since Michael Faraday’s first electrical motor. It has also played a very big part in the life of Eddie Davies, who made his considerable fortune in kettle elements, and, by association, in the life of Bolton Wanderers, who have been plugged in to the power supply of Davies’s co-ownership since 2003.

Now, though, a switch has been flicked and Davies et al are no longer the benefactors of Bolton that once they were. “I think time is of the essence now,” Neil Lennon, the Trotters’ manager, told local BBC radio this week. “Otherwise we could be facing the scenario, maybe down the line, of administration so it’s important the process is hurried along now.

“I’ve been told there’s no money left to even bring in loan players so the club needs an injection.”

It must have come as a shock to Lennon, who, having been used to the near-guarantee of success at Celtic, took on instead the promise of potential promotion at Bolton in October 2014, only for the rug to be pulled from underneath him. But then his team’s current financial state is no surprise to those who have been following the Trotters’ fortunes.

I wrote here almost two years ago [see related article below] about how Bolton were creaking under the weight of their net debt after it reached £164.4 million. If Lennon and his advisers did not read that (and I concede they are unlikely to be frequent visitors to this column) then they have not approached the negotiation with the club’s board particularly sensibly. The current predicament, wherein, as Lennon says, the threat of administration looms, was very well signposted.

The accounts for the year to June 2014, made public in June this year, were quite explicit that there was “a material uncertainty in the event that the company’s ultimate beneficial owner becomes unwilling at any time to continue to provide any additional future funding support to the business to the required level that it has historically done. This condition, along with the other matters explained in the financial statements, indicate the existence of a material uncertainty which may cast significant doubt about the company’s ability to continue as a going concern.”

This was a very clear indication that the auditors had been unable to procure guarantees from the ownership that it would continue to support the club. And for good reason: now Davies and whoever else makes up the Bermuda-based Fildraw Private Trust that owns the club (and controls its loans) have stopped handing over any more money.

It is no surprise that the ownership’s cash support became exhausted. My analysis shows how £89.4 million of shareholder loans were injected into the club in only the five-year period between the 2009-10 and 2013-14 seasons inclusive. That was as a total of £115.2 million of debt plunged into Bolton over the period.

The main beneficiaries were the players, as the graph below shows.

What we see is a cliff-edge event in 2011-12, with relegation from the Premier League. Turnover was cut in half but the wage bill for players who had been unable to keep the club in the top division did not commensurately shrink. The relative improvement in turnover during the 2013-14 season was not sustainable as it was accounted for by the £3 million rise in parachute payments from the Premier League, which are finite and for Bolton will run out at the end of this season.

For a short while last season Brett Warburton, a Bolton director and scion of the bakery firm that is the biggest grocery brand in Britain after Coca-Cola, attempted to stem the tide that was inexorably turning against his club. With hopeless optimism he squirted £2.5 million into Bolton’s coffers of ahead of the January transfer window. The benefit was at the very best short term. Now Bolton are languishing in the relegation zone of the Championship with the threat of a 12-point deduction for administration looming.

Indeed, even if somehow salaries had reduced at the same speed as revenues, it would not have been enough. The wages-to-turnover ratio in 2009-10 was 86.1%, in 2010-11 it was 92.3% and in 2011-12, 94.7%. In every one of those seasons Bolton’s matchday income was the worst performing among those Premier League clubs who provided segmental breakdowns of their revenues, putting them in the bottom third if not the bottom quartile of the division.

This is a very important point. Because as Trevor Birch, a highly respected Red Adair figure for distressed football clubs, seeks to market Bolton to potential buyers, there is a big question about what he has in his hands to sell. Birch has previously occupied a similar role at Chelsea, Leeds United and Portsmouth but all had much more to offer than Bolton, a club in Greater Manchester toiling in the shadow of two, greater Manchester clubs.

It is unclear whether the £5 million overdraft facility with Barclays was repaid as forecast last season but that was not the only external debt Bolton carried. Moreover, although the outstanding shares in the revenue-generating hotel they part-owned were acquired cheaply (for £1 in fact) in 2013-14, growing the club’s asset base, a sale-and-leaseback of a £5.5 million slice of the stadium real estate in the same period reduced assets and added new rental costs to the outgoings.

With inflated wages, league performance sinking and a sense of malaise engulfing the club, it seems right now that a trading restructure is going to be difficult if the current owners seek anything but the slenderest value for their equity. It would be interesting to discover what they are asking to sell the club, whose gross assets were said to be worth £57.8 million at the end of the 2013-14 season.

In theory, the debt should not be troubling because by far the bulk of it – indeed, £174.3 million of it – was owed to the owners. But it has not always been benign. Unlike for many other football-club owners, the loans provided by Bolton’s were anything but ‘soft’. It is perhaps a little-known fact that in the past six years for which data are available, the owners received £22.9 million in interest from the club on the loans they injected, £7.1 million of which came following relegation from the Premier League.

These interest-paying convertible redeemable preference shares – loan equity – were converted into ordinary shares in the 2013-14 season but it was far too late. Would Bolton have benefited had that £7 million stayed in the business rather than being paid out to the owners from relegation? Probably.

Might they have avoided relegation altogether without paying that interest? Actually, perhaps they might. In 2009-10 Bolton had the Premier League’s eighth-highest wage bill and eighth-highest transfer investment, a position that declined year on year until they were ranked 14th and 14th in 2011-12, the year of that fateful relegation. With overall football investment of £57.7 million, the extra £5.5 million would have put them head and shoulders above Aston Villa, Everton and West Bromwich Albion that season, perhaps funding the player or two who could have cushioned them relegation. Indeed, paying out £5.5 million in interest to ownership when one-off interest costs of £9.2 million were sustained to other lenders in the same season seems to have bordered on the reckless.

But then there are never any guarantees that money can buy success in football: Queen’s Park Rangers fell down the relegation chute the following season despite being the highest wage payers outside of the Big Six Premier League clubs and the fourth-highest net transfer-market investors – bigger spenders even than Manchester United. What it is possible to say, though, is that but for the perennial loan support of its owners, Bolton was an unsustainable business even in the Premier League.

These days the Trotters are in a lifeless slump and heading to England’s third tier; the need for the impulse of cash support is greater than ever before. But now that the kettle-element magnate and his co-investors have pulled the plug, where it will come from is impossible to imagine. Who would pour electricity into a non-conductor?