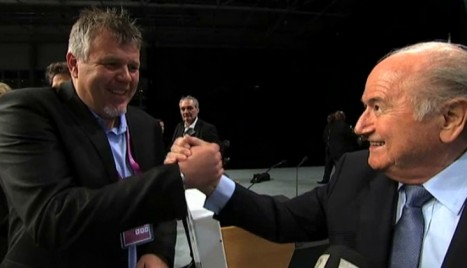 Who would have thought that a group of Norwegian bloggers could shatter the glass walls of FIFA, UEFA, etc. What they delivered in terms of conspiracy theories about UEFA’s new boss, and FIFA’s new Audit and Compliance chief is pretty cool – time will prove how correct their suppositions are but questions have been asked.

But they have inadvertently uncovered is a relationship that needs a bit more examination. It is one that was made in Norway alright, lived there for a while too, left to be a star in South Africa (which didn’t work out so well), returned to the homeland to seek greener pastures, only to end up where he had already begged to end up on September 30, 2009: Zurich. At FIFA.

The Norwegians (Swedes, somewhat unkindly, say that they all wear backpacks, all the time) highlighted a character who is really interesting and not given nearly enough credit. His name is Kjetil Siem, he is a bear of a man (after all, he IS Norwegian, folks, and does carry a rucksack at all times), is not very happy with his English language and can be a bit rough around the edges, but who cares when he loves fly fishing and stuff like that.

He was the Norwegian FA general secretary for quite a while. And he was, wait, also very very close to the Nobel Centre? But above all this, he has suddenly become very very interesting (important) to FIFA’s new leader,

But how did this sudden love develop? A Norwegian bear, now Director of Strategy at FIFA? Really? How did that happen? But not only that. He is also overseeing Thierry Regenass’ Division as interim Director for Development, one hears. Right, that’s where the real big money flows, doesn’t it.

So, let’s recap: the man from the Fjords, falls up the ladder so fast that nobody can rub their eyes fast enough, to ask the simple question: why him? Indeed, why him?

One of the very first appointments of the world’s new global football chieftain was this man Kjetil. It seems that Siem seems to have privileged access. I mean, not even FIFA’s boss would appoint somebody from nowhere (only in football terms, of course, I love Norway!) to such important posts where development funds change hands so quickly that one wonders where all those pockets are. Could some of them be in Africa by any chance? And if so, why? Let’s see.

Kjetil was the GS of the South African Premier League (and very much hated by Mr Khoza). That in itself need not be a bad thing, but that disrespect from Khoza was one of the motives why Kjetil wanted out and away from South Africa. And the timing of his attempt was perfect: it was the Christian God’s year number 2010 when good Kjetil decided that it was time to move on and step up in the big world.

From Norway to South Africa had already been a daring move, but his next move needed wit, charm, savoir faire, ingenuity and a high dose of ruthlessness. Of all of the above, only the last one applied. Kjetil tried hard to force his way into FIFA’s doors, armed with but that: ruthless perseverance.

And he didn’t start at the bottom. Somehow, through a mad dog Englishman, he got access to a guy who was close to Blatter, a guy who could get stuff done, he was told. So, he went for it. His newly found contact swiftly introduced him to the ante chambers of power at the time, and Kjetil was determined to keep his foot in the door. ‘Handshake for Peace’ was his mantra – or, shall we say, the smokescreen – and the Nobel Center was the Ace up his sleeve. And Blatter was the target. And endearment was suddenly easy.

What did Kjetil do between 2010 and 2015, you ask, to be not only noticed by FIFA’s top echelons at the time, but to endear himself to such an extent to Old Fox Sepp causing him to blabber (blubber?) about Kjetil as “one of my three most trusted people in FIFA”. That’s strong stuff. Kjetil had arrived! He was in the Inner Sanctum of Power, only that the power did not last long enough for Kjetil to manoeuvre himself into a lasting position of employment (which he longed for, and had applied for repeatedly). But he was well on track.

Having won Blatter’s trust (and having organised ever more important meetings with Norway’s Nobel Center through that ludicrous Gutmensch-bollocks called ‘Handshake for Peace’, something that appealed to Blatter tremendously, after all he was running for World Peace, no wait, he was running for the Nobel Prize for World Peace. That’s it! The famed Novel Prize! A dream come through). The ultimate glory sought by the very man who betrayed his friends with the frequency others change their underwear. Another famous man – not Norwegian, alas! – American, and bearded and very very unsavoury as history would show, once said of Blatter to a closed circle of tight-lipped cohorts: “The only time you need to fear Blatter is when he starts calling you his friend.” Wow. But Kjeitl had long passed that baton of friendship. He was now Sepp’s “one of the three most trusted” people in FIFA.

2015 it was, and the shit started to hit the proverbial fan. In every direction. But mainly in a westerly and north-north-westerly fashion, only to turn south (-American) with a speed that ended some 40-odd careers and resulted in more guilty pleas than there are teeth in a US Attorney’s mouth.

And after the fateful events of 2015, and a very long summer, re-elections were nigh and a new FIFA boss was to be elected. The long summer was followed by nights of the long knives in late autumn and as history shows, Blatter still had a few Aces up his sleeves, although he was out by the grace of the very committee he had co-created. Banned and mistrusted, accused of all sorts of things and worse.

But before good Sepp made all those calls to Africa and South America – boy, wasn’t it beautiful, just like the Good Old Days! – before he made sure that his friends would do the right thing and vote for the right (white) man, he had a few requests. Nothing major, nothing worrying, nothing untoward. Of course not. There were three things. One of those was Kjetil.

With Kjetil heaved into position, Blatter could be sure that he had the continued access that he so craved (after all, another key man, also heaved into very very high office since then, was his number one “most trusted person in FIFA” – remember, there were three…), and, the number three, Kjetil, would always comply, would he not? Of course he would: he is Blatter’s creation. And now he is where the old fogey wanted him: right up there, next to FIFA’s new leader. Right where FIFA’s power is distributed…sorry: executed. Whatever, you know what I mean.

So, here it goes: while the Norwegian bloggers, and others, focussed wildly on UEFA’s new man and FIFA’s other damned Eastern European (I mean, how do they dare bring on a bloody eastern European! Come on!), they missed the point that the Trojan horse is of Norwegian making. Blatter’s “I only trust three people completely” – Siem is the man. As he was to be the man, once the election was won, with the African vote (I hear there is another angle too, to that famous African landslide, but that is for another day), and South America’s blessing.

The man who carries the banner for the truly unsavoury old guard, is Norway’s own Kjetil Siem. And whether it seems likely or unlikely to you is irrelevant: it is fact. And there are tons of emails to prove it. And yes, we love the copies.