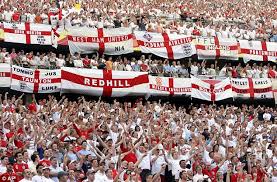 Whether we like it or not, Britain is leaving the EU, leading to all manner of ramifications, complications and consequences. But what effect will it have on the country’s place in European football?

Well before British Prime Minister Theresa May triggered Article 50 this week, a debate had already started about British clubs finding it more difficult to operate in the transfer market in terms of work permits as a result of the far-reaching decision to sever links with the 27 other EU members and go it alone.

But there is another far more worrying, immediate and sinister Brexit-fuelled threat looming on the footballing horizon. One which could seriously besmirch the country’s reputation at home and overseas in the same way it did two generations ago.

I wouldn’t necessarily put money on it but one can’t help but wonder which way those inebriated idiots – mostly, as one British newspaper put it, disaffected white working-class men –  who insulted and offended their German hosts during England’s recent friendly in Dortmund, voted in last year’s referendum.

If ever there was a cast-iron example of the Little England mentality returning among groups of fans who follow the national team overseas, this was it. The question is, will it be the sign of things to come now that Britain is to become even more isolated?

Tellingly, there was no whingeing from the England louts in Dortmund that they were provoked; that their shameful anti-German chanting and mimicking of fighter planes with reference to the second world war was in some way the result of being goaded into a reaction.  That’s because the “not my fault” excuse simply wouldn’t have washed.

And let’s not get sucked into the rhetoric about the culprits simply indulging in a spot of banter and being just a small minority. No-one is suggesting all of the patriotic England following in Dortmund were guilty of misbehaving. A majority no doubt did absolutely nothing wrong and supported their team with passion and fervour. But to always use the tired argument that it’s only a few miscreants who ruin the occasion for everyone is a convenient way of glossing over such nauseating scenes. It also misses another point. Whether it’s 20 fans or 200, the issue is still the same.

Inevitably, after the disgraceful, beer-swilling antics, the head of the English Football Association was quick to condemn the disorder as “inappropriate, disrespectful and disappointing”. Yet Greg Clarke, taking a somewhat defensive stance, refused to issue a direct apology.

A shame because the timing of the chanting, Nazi salutes etc was as ominous as it was embarrassing. The more, in the coming weeks and months, that Britain distances itself from the rest of Europe, the greater the opportunity for those who use football to express their sick extremism and rampant nationalism.

On a radio programme last Sunday, I heard a debate about how there was a need for better education, about how a culture change was required to get the message across. Really? This is exactly the same phrase – culture change – that is used by those authorities and anti-racism bodies who are increasingly and understandably concerned about tackling persistent outbreaks of discrimination among fans in predominantly Eastern European countries who are supposedly less educated and cultured than their Western counterparts.

Are we therefore to draw the conclusion that British fans, or rather English in deference to the rest of the United Kingdom’s generally well-behaved spectators, are in danger of plummeting to the same vitriolic depths? Not at domestic level, perhaps, where grounds thankfully are well-policed and properly stewarded. But overseas, at national if not club level, the lessons of the past still do not appear to have been learned.

What occurred in Dortmund demonstrated that the worst excesses of English football continue to be exported overseas. One can only hope that as Theresa May strives to get the “best deal” – the phrase of the moment – for her country over the coming weeks and months, this particularly nasty and intimidating export to Europe’s towns and cities can be stopped in its tracks before further tarnishing Britain’s image and identity in the eyes of the outside world.