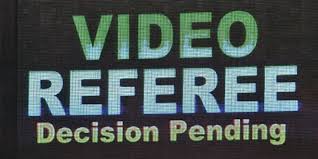 By Andrew Warshaw in Zurich

March 2 – Imagine the scene. It’s the opening game of the World Cup in Russia and the anticipation is at fever pitch in the stadium with billions more eagerly watching on television.

Suddenly the referee disallows a goal and makes contact with the video assistant referee. The whole stadium is kept in the dark for minutes on end not knowing what’s going on while the players stand around – maybe boiling hot, maybe in pouring rain – waiting to discover the outcome before the game finally carries on.

This is the kind of scenario football’s lawmakers will have to grapple with when they meet on Saturday to decide whether or not to authorise VARs for the World Cup. And, by extension, for any league that wants to officially implement the system thereafter.

Almost certainly the International FA Board will give the green light at their meeting in Zurich to one of the most significant and far-reaching rule changes of recent years.

But there are many, not least UEFA president Aleksander Ceferin, who believe the idea is premature and that a lot more experimentation needs to take place before VARs become law.

What happened at Wembley stadium earlier this week was a case in point, with scenes of utter chaos and confusion during an FA Cup replay between Premier League Tottenham Hotspur and lower-league Rochdale.

Only “game-changing incidents” that are clear and obvious are supposed to be referred to the VAR but here we had the farcical situation of the referee continually asking for advice over decisions that may not have been clearcut but which he could easily have taken himself.

In most instances, it has to be said, the VAR rulings were correct but at times the fans who had braved freezing temperatures to attend the game had no idea what was going on as the referee waited for instructions in his earpiece. The half-time whistle was greeted by a chorus of boos from home supporters who saw a goal disallowed and a converted penalty overturned. Shambles was one of many responses on social media. Comical was another. All because neither fans nor players knew which incidents the referee and video assistant referee were discussing, or how they reached their decisions.

Afterwards Tottenham manager Mauricio Pochettino, whose team won 6-1 to reach the FA Cup quarterfinals, summed up the feelings of many neutrals.

“I think we have the best referees in Europe or the world but I don’t know if this system will help them or cause more confusion,” said Pochettino. “It is a game of emotion. If we are going to kill this emotion I think we are going to change the game.

No-one should question the validity of video technology if it reduces the number of clear errors, which it undoubtedly does. Losing some of the game’s fluency is probably worth it on balance.

But the whole system needs more clarity when it comes to the length of time the game is held up, especially when no-one in the crowd knows what is being discussed. Incidents referred to the VAR (and there are supposed to be only four types – disputed goals, penalties, straight red cards and mistaken identity) are not supposed to take more than 40 seconds, yet it took around eight minutes on Wednesday for everything to be ironed out.

As football’s lawmakers prepare to take a momentous decision (one that FIFA president Gianni Infantino personally and fanatically endorses),  the problem is not VAR per se but the way it’s being used. The fact is there are far more questions than answers. Why, for instance, didn’t Wednesday’s referee go to the pitchside monitor to have a look for himself?

In one sense IFAB members will be damned if they do and damned if they don’t on Saturday. If VARs are not used at the World Cup and a team is eliminated because of a clear injustice, the protests will be heard all the way to FIFA HQ. But what if, as has happened in countries like Germany where the system has been trialled in league games, the referee refers the wrong incident to video technology. Or, as is highly possible as things stand now, the VAR official himself makes the wrong call? The protests will be equally loud.

One thing’s for sure. There’s a huge amount of responsibility on the shoulders of the four British associations and FIFA – the men who make up IFAB –  this weekend.