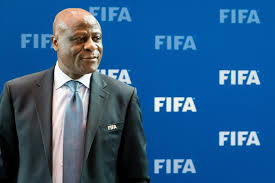 April 20 – Constant Omari, the Democratic Republic of Congo football association president and one-time FIFA reform official arrested as part of an embezzlement probe in his country, has been released on bail for health reasons after being held for 21 hours.

In what is a hugely embarrassing situation for both FIFA and African football, Omari is a vice-president of the Confederation of African Football as well as being a FIFA Council member.

But perhaps even more ignominious is the fact that he was a member of the FIFA reform committee that was supposed to have laid the groundwork for a fresh start at football’s world governing body after its reputation was shattered by years of corruption.

The AFP news agency quoted a local magistrate as saying Omari “has been provisionally released”.

But there was some confusion over whether those arrested with Omari remain in custody. They include Sports Ministry secretary-general Barthelemy Okito, FECOFA’s second vice-president Theobald Binamungu and finance director Roger Bondembe.

Some reports said they were also out on bail though AFP quoted the afore-mentioned magistrate as confirming they remained in custody “until the investigation has been closed.”

The four had been questioned over the use of public funds in the organisation of matches in African competitions involving national sides as well as clubs.

Alain Makengo, a lawyer for the four men, told AFP they were suspected of embezzling $1 million earmarked for four matches.

The national football league (Linafoot) announced that it had suspended “all its activities until further notice”.

The decision was taken in solidarity with Omari and his two vice presidents who were “humiliated and unjustly deprived of their freedom” according to a statement signed by Linafoot chief Bosco Mwehu and his secretary Emmanuel Kande.

Not everyone will be quite so sympathetic.

A key ally of FIFA president Gianni Infantino in his 2016 election campaign, Omari organised private meetings of African federation presidents to discuss Infantino’s manifesto and pledges. He was also a supporter of Madagascar’s Ahmad Ahmad for the African confederation (CAF) presidency, having previously stood behind long-standing African football chief Issa Hayatou, who Ahmad defeated in that election.

Despite being released on bail and despite being innocent until proven guilty, Omari’s removal from the football political landscape, temporary or not, once again calls into question FIFA’s supposed transparency in the post-Sepp Blatter era.

The fact that three years ago he was a hand-picked member of the reform committee chaired by Swiss professor Francois Carrard will only serve to fuel the widely held view that FIFA is still rife with unscrupulous individuals and that the old ways have certainly not yet be swept away as Infantino would have us believe.