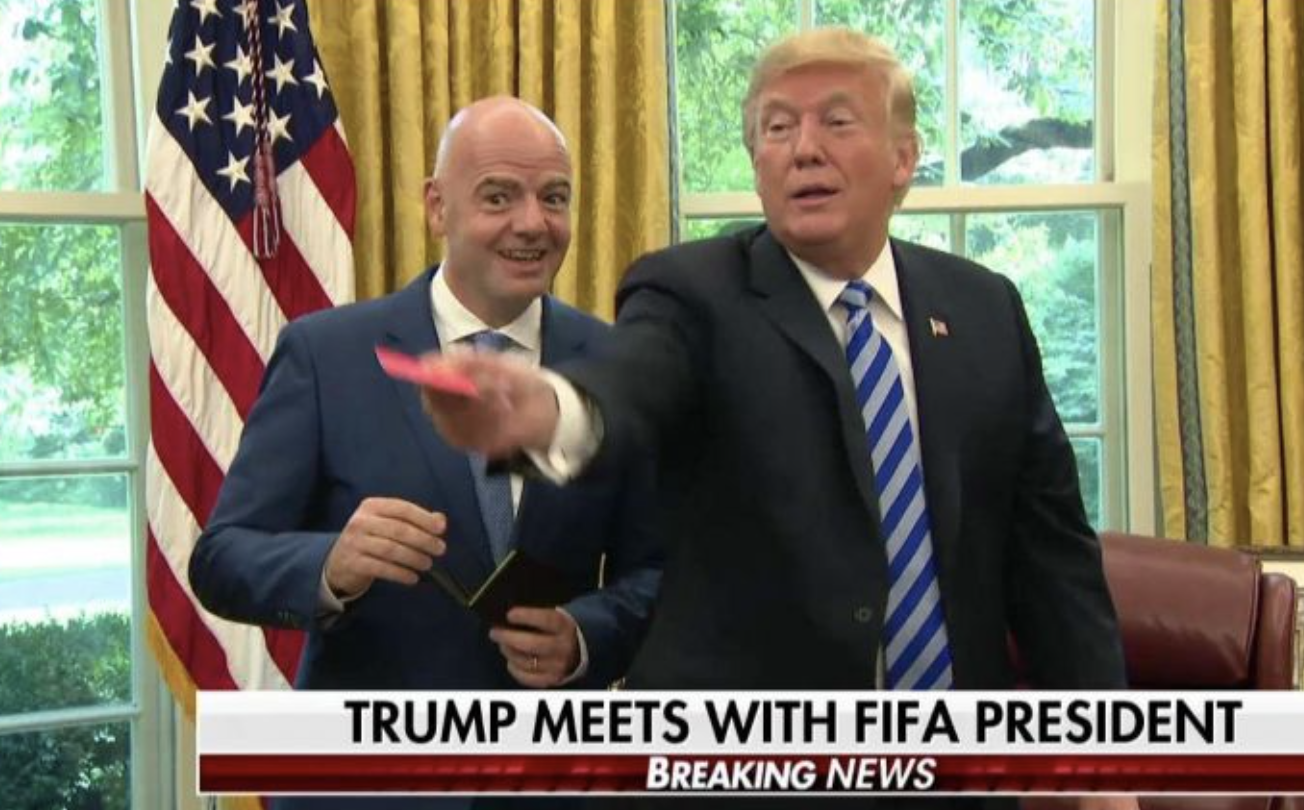 If an unindicted co-conspirator in a US federal criminal case tells you “I want to thank Gianni Infantino for being here – he’s the president of FIFA and a highly respected man,” it is a dubious honour at best. If the same unindicted co-conspirator continues to say “Let’s see, in 2026 I won’t be here [as president]. Maybe they’ll extend the term? If they don’t extend it the media is going to be very boring, they’ll all be out of business I guess,” then you start getting a bit of a weird feeling in your stomach.

For starters, neither of the two men will be in office by the time the US World Cup takes place in 2026. Because let’s be real here: it IS a US World Cup. Mexico (who are not paying for the The Don’s Wall) and Canada (who seem to be all over the place in everything these days, including Saudi) have been reduced to puppets on a string. This writer would not be surprised if, further down the road, both neighbours of MAGA-Land would simply drop out, citing “irreconcilable differences”.

But what is fun to register, is the usual Trump idiocy. It didn’t let down anybody once again, while a stupidly grinning Infantino thought it was enormously funny and witty, excitement dripping from his every facial segment: “…Maybe they’ll extend the term [of Trump’s presidency]? If they don’t extend it the media is going to be very boring, they’ll all be out of business I guess”.

There is something called the Constitution that governs the United States of America, a valuable document influenced by the French and their Revolution. Said document maintains that any elected President can serve two terms, max. While Infantino must have thought that his new Bestie’s remarks to usurp the Constitution so that he, Trump, could enjoy the labour of his underlings as reigning President of the USA in 2026, was hilariously funny, some of us don’t think so. But of course, we all know that this is always a thinking FIFA president.

Trump rarely says anything without an agenda in the back of his mind. He is the true “agent provocateur” (not of the lingerie type, but a real one, although he may have some experience in the lingerie area as well, if Stormy Daniels’ and Ms McDougal’s narratives are correct). Hence to surmise that there might be a chance of him extending his scandal-ridden presidency by another term after 2024 (he does admire the Chinese version of life-time leadership), is one of two things: perfect delusion or an attempt at testing the US Constitution. Let us see how all this pans out after the US Mid-term elections in November. There is an option that he will get closer to his wet dream to run innumerable terms after the hopelessly split Democrats lose the Mid-term elections for Congress. If that’s not the case, variation number one will come into play: plain delusion…

Be that as it may, and what was not merely borderline disgusting but plain nasty, is Infantino’s calculated move to suck up to Trump (he loves to be sucked up to, or you’re fired), whose non-relationship with much of the media is a determining factor of this reality tv show called ‘I am the president, and you are fired’.

Of course the man of so many talents and hardly any expertise (applies to both of them), in this case Trump, jumped at the Red Card handed to him by a drippingly sycophantic Infantino. He instantly started to wave it at the assembled media, and this publication’s report said: “… pride of place amongst the gifts were the official yellow and red cards presented by Infantino who suggested to Trump he could use them in media meetings. Trump needed no further invitation as waved the red card at the gathered media contingent saying: “That’s very good. I like that! I like that.”

Very funny and exhilaratingly creative, of course. New FIFA style. But also quite astonishing (not) when Trump’s reaction was exactly what this FIFA President stands for: a minimum amount of transparency, a pathological dislike for the media and the silent hope that they all would just quietly go away. In that endeavour, the two men see very much eye to eye. Although Infantino sees eye to eye with everybody in high office, anywhere, who he can suck up to.

In brief: two men have met for an orchestrated showtime without any substance whatsoever to report about. Now firmly in love (until Trump changes his mind, which he is well known for, and is a virtually daily occurrence) and joined by the hip to defeat the nasty media, they have achieved absolutely nothing for football (no, Massa Trump, it will not be called soccer. Ever). What they have jointly achieved is to create a nauseating feeling in many a stomach and the certainty that FIFA’s present “leadership” is firmly on the wrong track in virtually everything. But hey, who cares, right? After all, they both adore the Saudi money, one to sell weapons that murder Yemeni school children in buses, the other to pursue a 25-billion-Dollar wet dream of “a presidency forever” (forgetting that in the meantime that broadcasting rights are being stolen on an industrial scale, putting the ‘Grand Theft’ video game to shame).