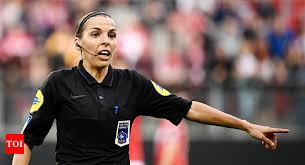 April 24 – A men’s top-flight match in France will be refereed by a woman for the first time this weekend when Stephanie Frappart takes charge of the fixture between Amiens and Strasbourg.

She will also officiate at the women’s World Cup, which will be held in France in June and July, her second appearance following the 2015 edition. She also took charge of the women’s under-20 World Cup final last year.

The French Football Federation said the appointment for Sunday’s match followed a request from FIFA to help referees involved in the World Cup “prepare in the best conditions”.

In a recent interview with AFP, Frappart said she would see being appointed to a Ligue 1 game as “an acknowledgement of my competence.”

“I don’t want to be given top billing or put in Ligue 1 just because I am a woman,” she added.

Germany’s Bibiana Steinhaus became the first female referee in one of the top European leagues when she took charge of a Bundesliga match between Hertha Berlin and Werder Bremen in September 2017.