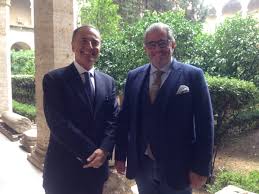 April 7 – Franco Frattini (pictured left) is the,Justice and Chamber President to the Italian Supreme Administrative Court and the leading judge tackling mafia and organised crime in Italy. Frattini is also the chair the Sports Integrity Global Alliance (SIGA). In a joint statement with SIGA CEO Emanuel Macedo de Medeiros (pictured right), they say the battle against financial crime in sport must be harder and faster fought.

“In light of the new superseding indictment lodged by the United States Justice Department at the Eastern District of New York against several former FIFA officials and media and marketing executives, unsealed yesterday, the Sport Integrity Global Alliance (SIGA) takes note of the new indictment and the extremely serious and grave charges therein. We expect that Justice follows its course swiftly, till the end, no matter who and which consequences arise.

SIGA has been at the forefront of the fight for Sport Integrity since its inception. We have consistently alerted the international community and all relevant authorities and key stakeholders to the increasing exposure and vulnerability of sport and the wider industry to a growing number of threats, often involving transnational organised crime.

Regrettably, the pace of change has been too slow and the progress made over these past five years remains insufficient. Clearly, much more needs to be done!

To effectively prevent corruption and other crimes from tarnishing sport’s reputation, the need for global leadership, enhanced cooperation and reformist spirit is greater than ever. Time has come to involve, not just a few, but all key stakeholders, and transform old platitudes into real action and aspirations into meaningful results.

With this purpose in mind, SIGA calls upon all governments and sporting authorities, as well as all like-minded organisations from the world of business (including sponsors, broadcasters and service providers), civil society and law enforcement, to place Sport Integrity at the top of the agenda.

In particular, SIGA calls upon all sporting organisations, including but not limited to, international and national sports federations, leagues and Olympic Committees,  to enhance their governance and the way they conduct their operations by adopting, without further delay, the SIGA Declaration of Principles on Sport Integrity and the Universal Standards on Good Governance in Sport, Financial Integrity in Sport and Sports Betting Integrity.

Similarly, SIGA calls upon all sporting organisations to go through the SIGA Independent Rating and Verification System (SIRVS), to ensure that global economy and sport are free from corruption, bribery, money laundering, tax evasion and the pernicious influence of opaque tax heavens, murky shell companies and illicit financial flows.

SIGA, our Members, Committed Supporters and Partners on Sport Integrity invite the G20, the OECD, the European Union and other relevant international organisations to support our collective efforts and ensure that the international conventions are strengthened and dully implemented.

SIGA is committed to root corruption out from sport and will continue working hard, with our membership base, to usher sport into a new culture, where integrity is placed at the top.