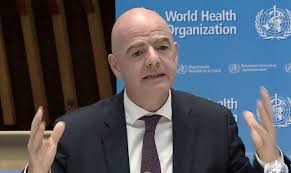 May 14 – A criminal complaint has been filed against FIFA president Gianni Infantino, with the regional prosecutor’s office in Bern, Switzerland.

Infantino, who is under fire for a series of secret meetings and undocumented with Swiss Attorney general Michael Lauber, is accused of trying to induce Lauber to commit a crime that would breach Swiss state secrecy laws and ultimately compromise criminal investigations.

The implication is that Infantino was trying to influence the Swiss judicial process, the English equivalent of perverting the course of justice.

Because two of the secret meetings took place at the Hotel Schweizerhof in Bern, the offence falls under the jurisdiction of the Bern canton and is now being examined by the regional prosecutor.

The spotlight was again put on Infantino following a newspaper interview with criminal law expert Markus Mohler, a former state prosecutor and chief of police.

Mohler argued that Infantino clearly initiated the meetings with the Federal Prosecutor and his office via his friendship with Rinaldo Arnold and that without Infantino’s initiative, these meetings would not have happened. The fact that the talks were not documented but instead covered up with still no detail of what was discussed, said Mohler, is an abuse of office.

Rinaldo was reportedly rewarded for organising the meeting for Infantino with FIFA hospitality totalling CHF20,000. This issue of Arnold’s gift has already come before Swiss judicial authorities before via a complaint by former German FA president Theo Zwanziger – one of two criminal complaints Zwanziger has made against Infantino.

Zwanziger has had his own run-in with the Swiss judicial system having been on trial with former German FA leaders Wolfgang Niersbach and Horst Schmidt plus former FIFA number two Urs Linsi. They were their own trial for misleading the DFB about the destination of a CHF10 million (€6.7 million) payment that was, according to prosecutors, used for buying votes to secure the German 2006 World Cup for Germany. That trial collapsed after the five-year statute of limitations expired.

If found guilty of a criminal offence, Infantino is most likely to be handed a fine rather than a jail sentence. If the state attorney does open proceedings against Infantino the question for FIFA’s Ethics function then becomes whether he should be provisionally suspended while those criminal proceedings are on-going.

At press time there had been no official comment from FIFA or Infantino.