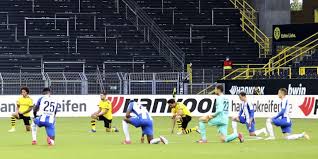 June 8 – For the second weekend running, Bundesliga players put on a strong show of solidarity for the Black Lives Matter movement with a range of protests.

Borussia Dortmund and Hertha Berlin players took a knee together around the centre circle before their fixture, with Dortmund players warming up in T-shirts with messages including ‘no peace, no justice’ and ‘united together’.

As large street protests took place in Munich and Berlin for racial equality and against police brutality following the death of George Floyd, on the field behind closed doors Bayern Munich players wore T-shirts reading ‘red against racism’ and wore armbands which read ‘Black Lives Matter’.

“FC Bayern stands for a world in which racism, discrimination, hate, injustice and violence have no place,” said a club statement.

Bayern head coach Hansi Flick said the idea had come from the team, before adding that racism “shouldn’t be an issue anymore, but unfortunately it is because there are still many idiots who react differently.”