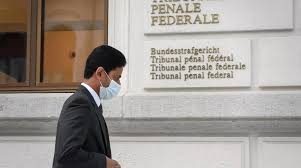 That is when the Swiss Federal Criminal Court in the town of Bellinzona, which conducted 10 days of hearings in September, will announce the eagerly anticipated verdict on the two men, along with Greek businessman Dinos Deris.

Prosecutors have called for a jail term of three years for Valcke – still serving an unrelated FIFA ban for breaking ethics rules – a 28-month sentence for Al-Khelaifi, who is also president of beIN Media, and 30 months for Deris, with partial suspension in all three cases.

It will be the first judgement handed down in Switzerland in the 20 or so proceedings opened in the last five years in the wake of the FIFAGate scandal.

Valcke, former right-hand man of Sepp Blatter, is alleged to have sought Al-Khelaifi’s help in the summer of 2003 to use a luxury villa in Sardinia, right at the time when beIN was negotiating media rights in North Africa and the Middle East for the 2026 and 2030 World Cups.

The prosecutor said Al-Khelaifi acquired the house for €5 million via a company that was transferred almost immediately to the brother of one of his close collaborators, before it was made available to Valcke.

It was  claimed that Valcke committed to “do what was in his power” to ensure beIN would win the contract and that he should have declared the Villa Bianca deal to his employers.

Al-Khelaifi  vehemently denies the charges that the villa was in any way linked to BeIn’s  $480 million deal with FIFA for the 2026 and 2030  tournaments, a record amount for the Middle East and North Africa and, his defence pointed out, significantly higher than FIFA’s target of $435 million for the region.

In fact, both men deny any corrupt agreement and said the deal was a strictly “private” arrangement.

In a separate matter not involving Al-Khelaifi,  Valcke stands accused of exploiting his position at FIFA to influence the awarding of media rights for Italy and Greece for World Cups and other tournaments between 2018 and 2030 “to favour media partners that he preferred” in exchange for kickbacks totalling €1.25 million.

During the recent hearing, Valcke, a former journalist who lives in Barcelona, told the court he had not found a job since he left FIFA in disgrace and had been unable to open a bank account in Europe since 2017.

If he is found guilty, it will represent the final comedown for FIFA’s one-time go-to figure who for years was assumed to be the organisation’s chief trouble-shooter but whose career ended in abject humiliation.

Conversely, if he or any of the defendants are acquitted, it will represent another kick in the teeth for the Swiss judicial authorities, already under fire for their handling of the Michael Lauber affair, in particular the former Swiss attorney general’s dealings with current FIFA boss Gianni Infantino.