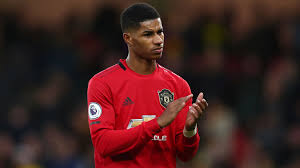 February 1 – Anonymous on-line abuse of black footballers in the English Premier League has reached such alarming and disturbing levels that even Prince William has now made a rare intervention to say it has to stop.

Government ministers have pledged to crack down after a number of black players were targeted in recent days simply for (seemingly) under-performing, the most high-profile of whom was Manchester United and England striker Marcus Rashford.

Last October Rashford became an MBE in the Queen’s Birthday Honours list after using his status to raise awarenesss about child hunger and forcing the British government into a u-turn regarding underprivileged children claiming free school meals.

His initiative made worldwide headlines yet even he has not been able to escape the disgraceful racism that has increased on social media during the current national lockdown.

Rashford took to Twitter to denounce the abuse following his team’s 0-0 draw with Arsenal but chose not to share screenshots of the multiple messages he received as he said it would be irresponsible to do so.

“Humanity and social media at its worst. Yes I’m a Black man and I live every day proud that I am. No one, or no one comment, is going to make me feel any different,” he wrote late on Saturday.

“So sorry if you were looking for a strong reaction, you’re just simply not going to get it here.”

United are working with social media companies to help identify offenders and on Sunday Prince William, who is president of the English FA, added his name to those calling for urgent action.

“Racist abuse – whether on the pitch, in the stands, or on social media – is despicable and it must stop now,” the Duke of Cambridge tweeted.

“We all have a responsibility to create an environment where such abuse is not tolerated, and those who choose to spread hate and division are held accountable for their actions.

“That responsibility extends to the platforms where so much of this activity now takes place.”

“We are united with all of football in our abhorrence of any racist abuse,” the FA said in a statement. “This is not acceptable in any part of society.

“We will continue to work with the rest of the game, the government and social media platforms to remove this – and all elements of – discrimination from our sport.”

“We are committed to removing it when we find it,” the statement added. “We have taken action in this case by removing accounts and comments and are continuing to investigate.

“We know there is more to do and we will continue to work closely with clubs, players and football authorities to investigate instances of discrimination and collectively tackle this issue.”

“What I heard last week was shocking, and the events of the last few days with more players talking about this show it’s a growing problem,” he was quoted as saying. “No one should have to accept racist abuse as the price to pay for being in the public eye.”