November 16 – This week FIFA’s inspectors resume their whistle-stop tour of cities bidding to be host venues for the 2026 World Cup, starting in Edmonton, Canada. It is a hugely important moment for this football city, but before they roll out the red carpet for the FIFA team, they have a more pressing football engagement.

Tonight a sell-out crowd in Edmonton’s Commonwealth Stadium, will roar on one of the world’s fastest developing men’s national teams against one of the world’s most established. Canada, currently in the third Concacaf qualifying slot for Qatar 2022, face Mexico who are a point ahead of them and joint top of the group with the USA.

Qualification is now at the half way stage with only the top three in the eight-team qualifying group automatically qualifying, with the fourth place team going forward to the inter-continental play-off. Canada has only once qualified or a men’s World Cup – in 1986 – now they are looking to only qualify for Qatar 2022 but will be joint-hosting one as well in 2026.

For Edmonton it is a case of being the right place at the right time as this Canadian men’s team continue their challenge to the established pecking order of football in the region.

Last weekend a near sell-out 49,000+ crowd roared Canada on to beat Costa Rica. Tonight a capacity crowd of more than 50,000 will be in the 12th player for the Canadians against Mexico. Edmonton will be showcasing in real time just what football means to the city. 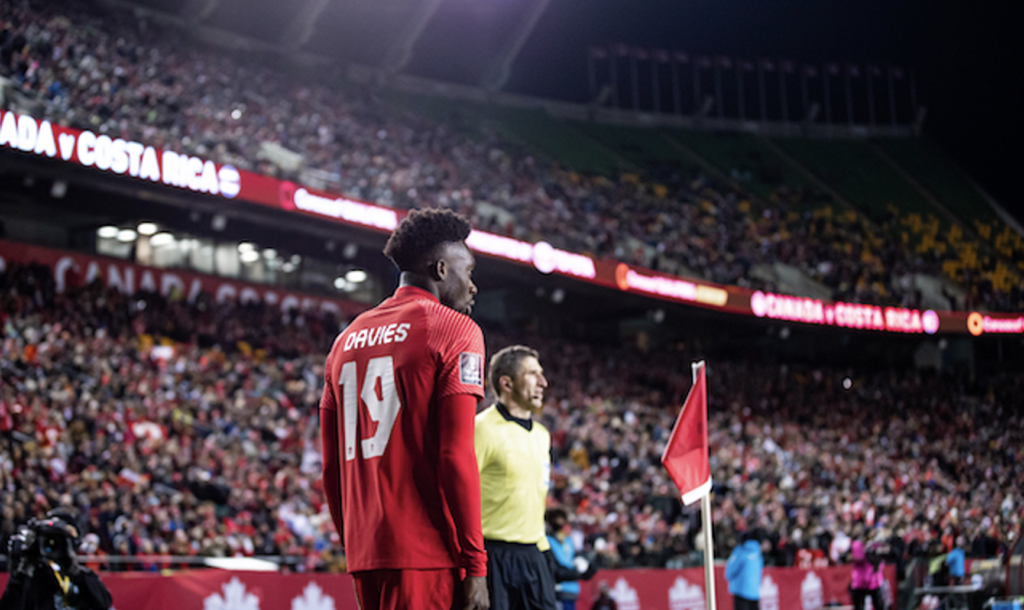 Ticket sales have reportedly surprised even the Canadian Soccer Association, as the growing passion for the sport in Canada is reflected in Edmonton, the capital city of the Alberta province located on the North Saskatchewan River at the north end of what is described as the Calgary-Edmonton corridor.

Canadian FA General Secretary Peter Montopoli, who will be joining the local organizing committee in charge of 2026 in Canada, said: “Without a doubt, without question, when Edmonton gets behind something, the city is absolutely the best in the entire country.”

In an ice-hockey crazed country, tonight’s match is on course to exceed the attendance record for a Canadian national team of any sport (54,798 fans).

FIFA’s bid inspection team will experience what this city can bring first hand but also see how it handles the logistics of a major football event, not least the sizable broadcast requirements that will be handled by OneSoccer who will produce 28-camera live coverage for Canadian, US, Mexican and international broadcasters with 100 TV professionals working across three Outside Broadcast Units.

The intensity surrounding this match is not just about Canada hosting big dogs Mexico for a crucial World Cup qualifier, but it is also about a country stamping their football credentials on what can be a fairly sceptical football world. Edmonton will be providing that seal, and with FIFA in town they hope it will become a seal of approval for 2026.

In 2015 Edmonton hosted 10 games at the Women’s World Cup, including last 16, quarter and semi-final matches as well as the third paced play-off.

The women’s legacy has endured with Canada winning the Olympic Gold in Japan this summer.

Wanting to play a part in hosting the World Cup in 2026 was never in question for Edmonton which has been a committed host city candidate from the first days of the successful United 2026 bid – the first time a World Cup will hosted across three countries and the first time it will be played by 48 nations. 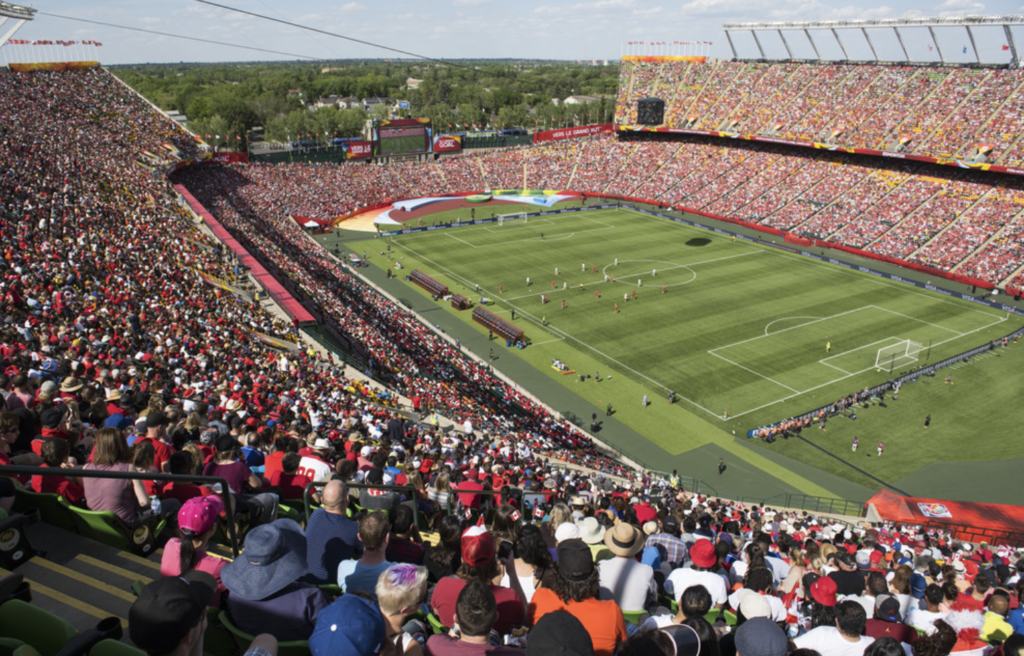 The city is proud of the role it played in providing the platform to help develop the women’s game domestically and internationally and wants to be similarly involved with the men’s game. When the Canadian Premier League launched two seasons ago, FC Edmonton was one of the first names on the founders’ list. And the city can lay claim to one of the world’s hottest young players, Bayern Munich’s Alphonso Davies, who has said that playing in Edmonton at a World Cup would be something special for him.

It is not just the football community that is getting behind the Edmonton push for 2026 hosting but surveys showing a remarkable 93% favorability for the city’s ambition to host World Cup 2026 matches, with industry leaders from across the city having pledged their support.

This includes the Champions Committee, made up of business and community leaders, who advise and promote the work of the candidature, as well as cross-sector support from sports organisations, community and educational institutions, and commerce.

Janelle Janis, Director of Edmonton Events, said: “We are so grateful to have the committed support and assistance of such a diverse group of community and business leaders within the city. One of the key pillars of our candidacy has been how united our city is, and how much pride we have for being Edmontonians. With Edmonton, FIFA can be guaranteed a city that will fully get behind the FIFA World Cup and embrace the tournament as it should be embraced.”

Immediate focus inevitably returns to the Commonwealth Stadium – the scene of tonight’s critical 2022 qualifier and the centrepiece of Edmonton’s 2026 host city bid. 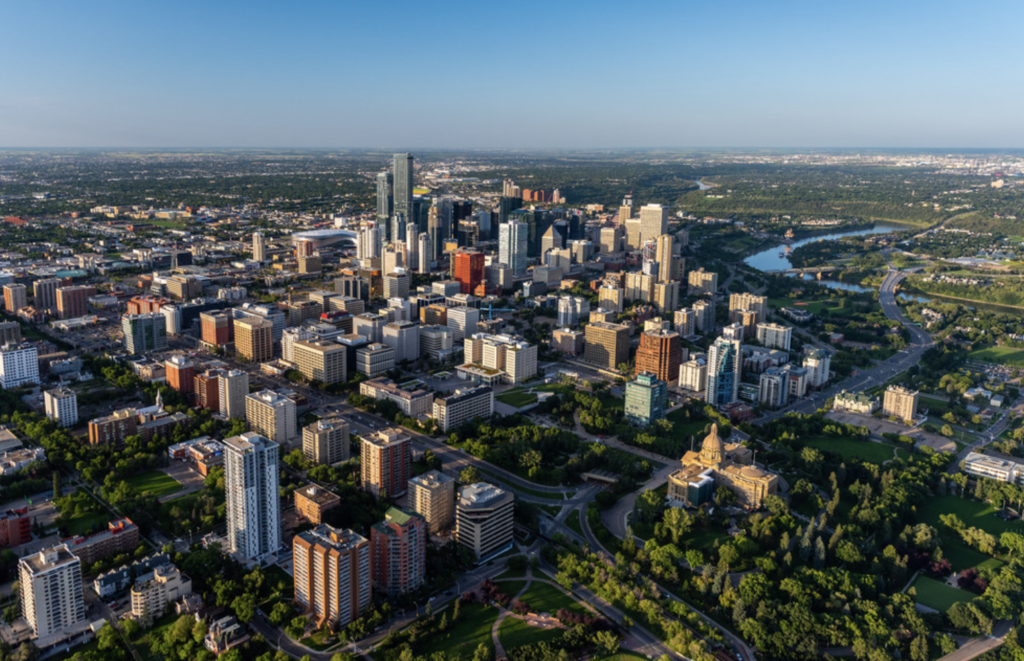 Built in 1978 for the Commonwealth Games, the stadium has developed into a 42-acre complex, and is just minutes from the city centre.

Tonight it could provide the stage for Canadian men’s football’s coming of age party. In 2026 it could become one of those iconic World Cup venues that forever imprints itself and its city in the psyche of world cup football fans.